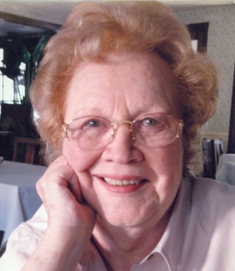 Jean Hemstreet Gaume passed away peacefully in her home of 50 years on January 15, 2013, surrounded by her loving family. Born in Oklahoma City, OK on November 13, 1917, to Edythe Regina Tipton and Andrew Jackson Hemstreet, Sr. and sister to A.J, Sidney and Paul Bertrand Hemstreet. Educated by the Religious of the Sacred Heart of Jesus at Duchesne in Omaha, NE, her deep, strong foundation supported her throughout her 95 years. She met James G. Gaume at Creighton University Medical School and they married on June 1, 1940, in Omaha, NE. They had 56 beautiful years together before Jim passed away in 1996. She volunteered as a Gray Lady in Grand Island, NE, while Jim served as an Army flight surgeon in the China-Burma-India Theater during World War II. Jean creatively led the Girl Scout Troop while Jim was the town doctor in Ellinwood, KS, for ten years. Then Jim's yearning to enter space medicine research launched the family to San Antonio and Denver before finally settling in Palos Verdes Estates, CA in 1962. At age 50, after her children graduated from Loyola Marymount University, Jean's love of education drew her to the Encore Program at LMU where she earned her B.A. in English/Creative Writing and received an LMU Presidential appointment at Alpha Sigma Nu. Always enriching her mind, she sought answers through literature and dreamed of writing the great American novel, but her family and faith were foremost. She was a long-time Associate of the Daughters of Mary & Joseph. Her genealogy searches took her to England and Holland revealing her American ancestors in the 1600's and qualifying for the Daughters of the American Revolution. Jean leaves her children, Pamela and Deborah of Palos Verdes Estates, and James A. Gaume, M.D. with his wife, Andrea Kritselis and their daughters, Sarah and Katie of Nashville, TN, and the extended families of one nephew and seven nieces, who have fond memories of vacations and elegant holiday celebrations in her home. Her intellectual curiosity, "joie de vivre" and graciousness will live in the hearts of her loving family and friends always. A celebration of Life will be held at St. Lawrence Martyr Church, 1900 S. Prospect Ave., Redondo Beach, CA on Saturday, January 19, 2013 at 2 p.m. In lieu of flowers, donations to: Duchesne Academy, 3601 Burt Street, Omaha, NE 68131 or Loyola Marymount University, William Hannon Library, 1 LMU Drive, Los Angeles, CA 90045.