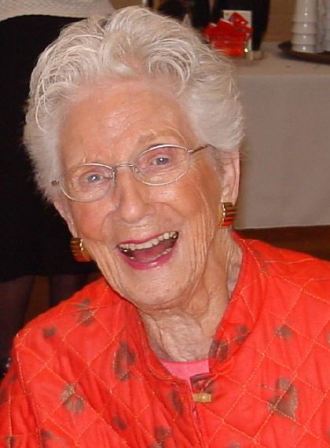 Janet Margaret MacKinnon passed away peacefully on October 17, 2017, at 2:35 p.m. in her home of 54 years. Janet was born on March 10, 1921, to Elsworth Livingstone (Jack) & Margaret (Meg) Mundy in Orange, New Jersey. During WWII she married John Donald MacKinnon, Jr. in an evening Mass at St Bernard’s Parish in West Newton, Massachusetts. They were married for almost 74 years. The love of her life, Don, survives her. Also surviving are all four children and their spouses: John (Mary) MacKinnon, Douglas MacKinnon, Christine MacKinnon (Chris) Payne, Lauren MacKinnon (Walter) De La Torre, her six grandchildren and her seven great grandchildren, her beloved sister-in-law, Eleanor MacKinnon Hochanadel, and her wonderful nieces and nephews. Janet's parents and sister, Lenore Horton, as well as her brother-in-law, Neil MacKinnon, preceded her in death. Janet and Don met at Newton High School in Newton, Massachusetts. They dated during Don's senior year and for his four years at Harvard University. During that time, Janet attended and graduated from Mount Ida College. They loved to dance together, a lost art for many. They could pick up anywhere and would join together to do "their steps" when the music started to play. Janet always told the children that she taught Don how to dance. He was her perfect partner, groomed just for her. Theirs was a love story for the ages. They went through a lot but their faith kept them safe, sane and happy. A journey many miss. The whole family moved from Dedham, Massachusetts to Torrance, California, on December 22, 1962. It was the beginning of a new and wonderful life in Southern California. Janet loved boxer dogs, listening to bossa nova music, Tony Bennett and Frank Sinatra. She also enjoyed roses, gardening and fine jewelry. Once her children were grown, she worked at Torrance Unified School District schools part time and then found her niche and true self while working at Morgan's Jewelers. Morgan's became part of her family. Janet was a 28-year breast cancer survivor. After her diagnosis, she left Morgan's Jewelers and started her next phase of life at Torrance Memorial Medical Center. She and Don volunteered there for more than 20 years and retired in their early 90s. All the while, Janet remained involved in various ministries at their parish, St. Lawrence Martyr Catholic Church. Janet loved and appreciated her family, life, people, music, purebred dogs, beautiful things, good neighbors and God. Her greatest legacy is the lasting love she and Don shared. She adored her high school sweetheart. She leaves the wonderful legacy of four children and their spouses, her grandchildren and their spouses: Shawn (Brad) Johnson, Bryn-Ane (Elon Schoenholz) MacKinnon, Ian (Kris Habereder) MacKinnon, Brett (Becky) Egan, Jackson DeLaTorre and Clare DeLaTorre; and her seven great grandchildren: Nusia and Ivan Schoenholz; Cole and Cade Johnson; and Jake, Tory and Reese Egan. A celebration of Janet's life will begin with a Memorial Mass at St. Lawrence Martyr Church at 10:00 a.m. Tuesday, November 28, 2017, with a reception to follow in the parish hall. The address is 1940 S. Prospect Ave., Redondo Beach, California 90277. We invite you to join us as we celebrate Janet's life. She would love it if you wore bright, colorful clothing. Red was her favorite color. A special thanks to the staff at TMMC and Torrance Memorial Hospice. They made Janet's passing peaceful. In lieu of flowers, donations to Torrance Memorial Hospice, 23326 Hawthorne Blvd., Suite 100B, Torrance, California 90505, Attn: Amanda Stewart or your favorite charity would be appreciated.