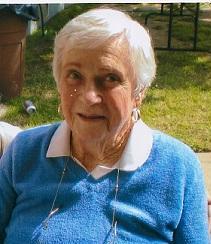 Jane W. Medlicott (1918-2013) Jane was a Manhattan Beach resident for 63 years. Her wonderful life began in Chicago, where her parents moved from England, on August 7, 1918. Her family then moved to Pasadena when she was 5. She went to Pasadena Business College and earned her AA degree. Afterward, she took a job at Western Mortgage and worked for the President of the company. Jane met the love of her life, Stanley, when she was 17 at the old Hermosa Biltmore Hotel. They married 6 years later and celebrated 62 years together. He preceded her in death. She worked for many volunteer organizations during WWII while her husband, Stanley, was in the Navy overseas. When he returned from the war, they settled in Manhattan Beach in 1950. Jane was also a full time Mom. She was a member of many philanthropic organizations; two of which were Rotary Anns and Sandpipers. When her two daughters were of school age, she took a job as a dental office secretary. Members of the community remember her well, as she orchestrated their dental care. Her passion was obedience training dogs. She would train a few times a week and on weekends could be seen at dog shows all over the county. She won many awards and degrees with her Labradors. One award that she was particularly proud of was CD (Companion Dog) – which allowed her to take her Labrador to various hospital settings and bring happiness to the sick patients. Jane or "Nonnie", as she was affectionately called by her grandchildren, was known for her generous spirit, love of all things chocolate and her love of dogs - specifically Labradors. Jane is survived by her two daughters and sons-in-law, Deborah & Rocky Wilson, Susan & Bud Palmer; seven grandchildren, Bryndis, Mitchell, Kalee, her fiancé Richard, Koree, her husband Tim, McKenna, Kincaid, Nicole, her husband Steve, one great grandchild Michael, and adopted daughter Tina Maury. Jane is at peace now reunited with her husband Stanley and their three favorite dogs, Sunshine, Amber, and Chipper. Please join us for a celebration of life on Sunday, October 13, 2013 at 1:00 on 14th St. and The Strand in Hermosa Beach, where they met.