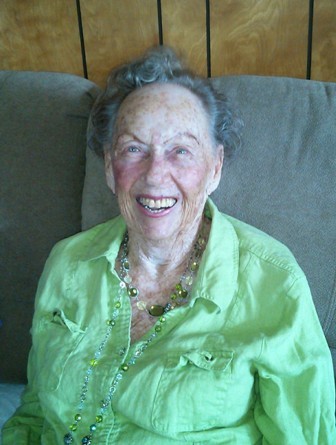 Jane Fish 1923- 2014 On Saturday, November 29th, Jane DeEsta (Simkins) Fish passed gently from this world. As a member of one of Manhattan Beach's "fifth generation families", Jane was a true California beach girl, living her entire life in the beach cities. She graduated from El Segundo High School (class of 1941), attended Santa Monica City College and worked at Standard Oil. Jane was preceded in death by her husband, Mahlon "Bob" Fish, a prominent South Bay educator and Aviation High School principal. Throughout her life, Jane worked to serve the South Bay community. She held key positions with the Parent - Teachers Association (PTA), with scouting programs and with her precinct's voting staff. Most notably, Jane volunteered her time and talents for many years at the former South Bay Hospital. Deeply committed to her Catholic faith, Jane's family were original members of the American Martyrs parish. Jane loved the times she spent with family and friends. One life-long friend noted that Jane knew someone wherever she went throughout the South Bay. She also greatly enjoyed her "golfing gang" and camping with family and friends, often in remote areas. In their retirement years, Jane and Bob frequently traveled California and the US in their Recreational Vehicle. Jane is survived by her son Mark and Kathy Fish (Manhattan Beach); daughter Lynn and Chad Skriloff (Poway) and her son Jim (Tempe, AZ). She also has five loving grandchildren: Michael Fish, Brock Skriloff, Steven Fish, Dane Skriloff and Caralynn Fish. Jane was preceded in death by her parents, George and Helen Simkins, her brother George and her sister Sally Despars. Jane is survived by her brother William "Bill" Simkins of San Rafael. Services will be held at American Martyrs Church, Manhattan Beach, Thursday, December 4, 2014 at 10:00 am with a reception to follow.