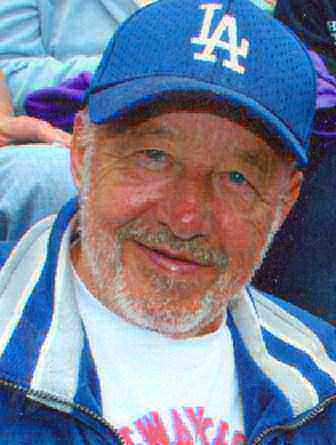 Craig, James W. "Jim" Native of Newburg, NY, born October 18, 1930, he was the son of Nora Ryan Craig and Leslie D. Craig. Jim was a Korean War Veteran and a construction work after his discharge. He moved to California in 1968 and retired from MTA after many years of service as a bus driver. A long-time resident of Redondo Beach, California, Jim is survived by his wife Heling and his sisters Shirley Enkler, Virginia Noll and Madeline Libolt, all current residents in the Hudson Valley; his children Shelley Coombs Wilcock, Jodi Brown, Kevin Craig, Jami Larssan, Leslie Collins and Joni Turquand; and predeceased by his son James K. Craig. Known as Pop-pop to his many grandchildren and great-grandchildren his legacy to them is his love for the game of baseball and the Los Angeles Dodgers. Memorial Service 2:00 pm, May 7, 2012, Rice Mortuary, Torrance, CA. In lieu of flowers the family asks for donations to Redondo Sunset Youth Baseball, www.redondosunsetfundraiser.com.