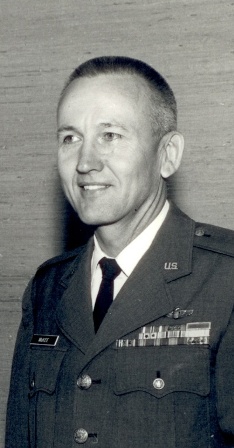 James Thomas McKee May 14, 1916 – March 3, 2012 Colonel James T. McKee, retiree of the United States Air Force and beloved son, husband, father, grandfather, brother and friend passed away on March 3, 2012. He is survived by his wife Ruby of 68 years; son Stephen; grandchildren Glenn and Catherine; great-grandchildren Karen and Brian. He was preceded in death by his daughter Karen, parents Hugh and Cammie McKee of Picayune, MS. Two weeks after receiving a BSC degree from the University of Mississippi, he entered the Air Force as an Aviation Cadet. In 1942 when World War II began he helped ferry the first B-25s to Basra, Iraq. He then flew bomber planes in the African Campaign against Rommel from El Alamein to the victory in Tunisia. In 1943 he returned to the US and married Ruby Taylor, his college sweetheart, of Grenada, MS. His last assignment before the end of the war was on the China Burma India staff. He also flew 43 missions over the "Hump" to China. After the war he went to Harvard University and received a Masters' degree in business. He was then assigned to the Pentagon as a Staff Officer in the Directorate of Procurement for four years. The next assignment was to Bonn Germany where he was Chief of the Logistics Branch of the Military Advisory Group with the mission of helping the German Air Force re-establish its logistics system. In Los Angeles he was Air Force Plant Representative to Hughes Aircraft Co. and later to Lockheed Sunnyvale. His last assignment before retiring from the Air Force was Vice Commander of the Air Force Contract Management Division. After retiring from the Air Force he worked seventeen years as a Los Angeles County Deputy Tax Assessor. He was a member of the Daedalians, The Society of the Cincinnati and the Scottish Rite of Freemasonry.