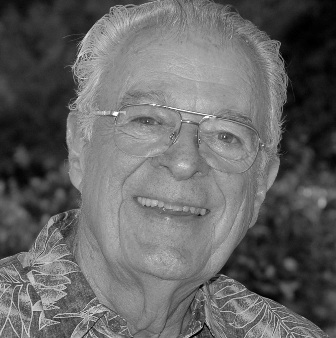 O'Donnell, James Philip (Jim) - Passed away peacefully at home of natural causes on October 6th with Beverly, his wife of 61 years, at his side. Predeceased by his loving daughter Mary Kathleen Randall and his sister Catherine Goldstein Campbell. Survived by son Timothy of White Salmon, WA; son Brian of El Segundo, CA; daughter Colleen O'Donnell Lackey of Calabasas, CA; daughter Sharon Helpio of Visalia, CA; grandchildren Tenaya, Taylor, Kelly, Courtney, Allison, Kevin, Megan, Rachel, Hannah, Colin, Erin, Emily & Olivia; great grandchildren Sydney and Gavin. Jim was born in Hollywood, CA, in 1927. He graduated from Fairfax High School in 1944 and was subsequently commissioned an Ensign in the US Navy in the final months of WWII. Jim attended University of Texas, UC Berkeley and UCLA, culminating with degrees in Naval Science and Mechanical Engineering. He then began a career in the Southern California Aerospace industry as a Mechanical Engineer, spending the majority of his career with the Space and Communications Group of Hughes Aircraft Company. Following retirement in 1992, Jim and Bev traveled extensively throughout western Europe. France and Italy were favorite destinations. Jim was an avid musician and music lover, playing the cornet and trombone in community bands throughout most of his life. He was a committed fan of Dixieland Jazz, and loved attending performances of the LA Philharmonic Orchestra. A funeral mass will be held on Saturday, October 17th at 11:00 a.m. at St. John Fisher Catholic Church (5448 Crest Road, Rancho Palos Verdes, CA 90275). The family is deeply grateful to Jim's dear friend Jerry Adams for his unconditional support, and to the Providence TrinityCare Hospice staff. If you wish, donations may be made in Jim's memory to Providence TrinityCare Hospice Foundation. Jim was a gentle and kind man who leaves us with many rich memories. He will live in our hearts forever.