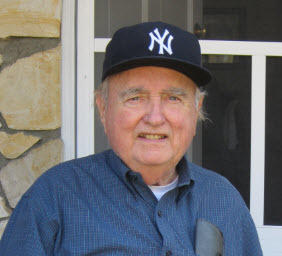 James John Curran, a 25-year resident of Torrance, CA passed away on Tuesday, October 18, 2016 in Torrance. Born on February 15, 1928 in County Kildare, Ireland, James was still a baby when he and his parents James and Josephine Curran and three older siblings, immigrated to America via Ellis Island and settled in the Bronx, New York. James was very proud of his Bronx upbringing and told endless stories of arriving six hours early for Yankee games and playing stickball, stoopball and jacks. At an Irish dance in 1952, he met Margaret Jane Shivnen, who had recently arrived from Ireland. They were married in 1953, soon welcomed two children, and then moved from New York to Los Angeles, settling in Westchester. James spent most of his career in sales for National Sanitary Supply Co in Los Angeles. With his magnetic personality, he was a very successful salesman. He retired in 1992, giving him many wonderful years to enjoy life with his wife. His greatest joys were spending time with their three grandsons and he was a regular at their sporting events and spent many hours driving them and their friends to school and practice. James and Margaret enjoyed travel too, taking many trips to visit friends and family in Ireland, New York, Toledo, and various other locations. A lifelong Yankee fan, no one was more passionate about the boys in pinstripes. He would challenge anyone who was up for the debate over who was the best team in baseball. There wasn't a person he would meet that he couldn't strike up the most fascinating conversation with. James will be remembered for his love of all things New York, his genuine love of people, and the endless stories he would tell to his friends in the Torrance community when he visited his local stomping grounds of McDonalds, Vons, and Starbucks. James is survived by his wife of 63 years, Margaret Curran, daughter and son-in-law Maureen and Fred Tafoya, daughter-in-law Carol Curran, and grandsons Brendan Curran, Derek Tafoya and Doug Tafoya. He is preceded in death by his son James Patrick Curran who passed away in July 2016. In lieu of flowers, please consider donating to the Juvenile Diabetes Research Foundation, www.jdrf.org or call 1-800-533-CURE. Funeral mass will be at Visitation Church, 6561 W. 88th Street, Los Angeles, 90045, Saturday, October 29 at 11:00AM.