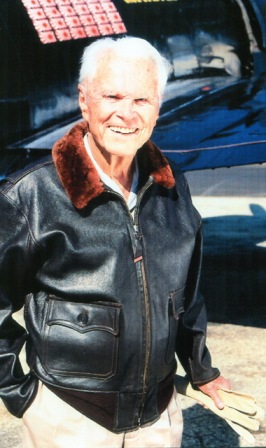 LAST FIGHTER PILOT DIES The last fighter pilot, who scored victories in the first Battle of the Philippine Sea (Marianas Turkey Shoot) and the Battle of Leyte Gulf, the largest naval battles in history, died on November 25, 2017. He was 97. James (Jim) Edward Duffy was born in Mangum, OK in 1920. When he was 6 years old, his family moved to Monrovia, CA. He graduated from Monrovia High School where he played the trumpet in the school band and marched in the Pasadena Rose Parade. After high school he attended Pasadena City College and worked at several aviation manufacturing companies. He enlisted in the Navy in 1942 with the onset of WWII. He became a naval aviator, flying the F6F Hellcat as a member of VF15 aboard the USS Essex. On November 5, 1944 he became an Ace - one of twenty-six pilots of VF15 to do so. After the war, he remained in the Operational Reserves and then the Ready Reserves until finally leaving the Navy with the rank of Lt. Commander. He graduated from the University of Southern California with a degree in Chemical Engineering. Together with his Uncle, Thomas B. Hickox, he started Luseaux Laboratories, Inc which manufactured detergents for the foodservice and hospitality industries. They were later joined by his USC classmate and lifetime friend, William B. Edwards. In 1948 he married his childhood friend, Gwen Castle and moved to Gardena, CA. They had three daughters. Jim was active with VFW Post #3261, Gardena Elks Lodge, American Aces Association, and St. Anthony of Padua Catholic Church. For many years he taught hunter safety to young people. He enjoyed flying (until age 89), hunting, camping, traveling, and was an avid reader. Jim is survived by his wife of 69 years, Gwen, and his daughters Linda Humphrey, Kathleen Kalohi, and Marjorie Duffy. He has 3 grandchildren and 3 great-grandchildren. A gathering of family and friends will be held on Sunday December 10, 2017 from 5-8pm with a Rosary at 7pm at Lighthouse Memorials & Receptions, McMillan Center, in Gardena, CA. The Funeral Service will be held on Monday December 11 at 10am at St. Anthony of Padua Catholic Church in Gardena, with a reception in the Lighthouse Room at the mortuary until 1:30pm. Burial will follow at Live Oak Memorial Park in Monrovia. In lieu of flowers, donations in Jim's memory may be made to The Museum of Flight, 9404 E. Marginal Way South, Seattle, WA 98108-4097, https://www.museumofflight.org