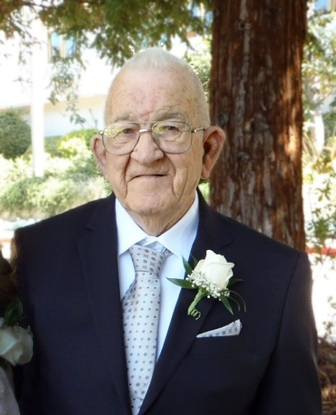 James Edward Dowling peacefully passed away on September 27, 2012 surrounded by family. Jim was born on January 27, 1930 in Cromwell, Connecticut. He was a longtime resident of the South Bay and he and his wife Yolande recently celebrated their 60 year wedding anniversary on September 1, 2012. From 1947 to 1950, he was a military policeman in the U.S. Army. He was awarded the Army of Occupation Medal for his service in Japan following World War II. After he was honorably discharged, he worked as a truck driver which he enjoyed doing for over 40 years. His interests included classic cars and trucks as well as hunting. He is survived by his wife Yolande, his twin sisters Janet and Jean, two children Muriel and Bruce, two grandchildren Christine and Katie, four great-grandchildren Ben, Ariel, Stephen and Daniel and one great-great grandchild Melody. He truly loved spending time with his family and friends. We all knew him for his booming personality and his entertaining stories and sense of humor. He lived a full life that we are grateful to have been a part of. We will miss him always. Our hearts are comforted knowing that he is at peace and we will reunite one day. Memorial Mass to be held on Saturday, October 13, 2012 at 2:30 p.m. at Saint James Catholic Church, 415 Vincent Street, Redondo Beach, CA 90277. Reception to follow at the Dowling residence.