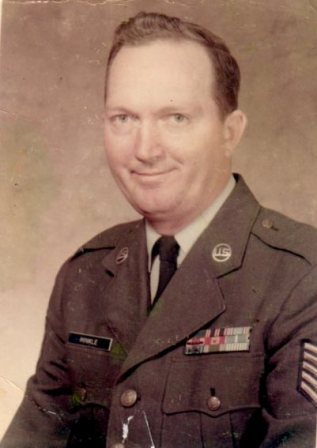 James Douglas Hinkle Sgt. James D. (Jim) Hinkle, USAF (ret'd.) passed away June 9, 2014 in Gardena, California. Jim was born in Temple, Texas on October 2, 1931 to John W. and Ruby Campbell Hinkle. Jim grew up in Temple, graduated from Temple High School and was a Golden Gloves Champion. Jim joined the Air Force after High School, and served at various U. S. Bases as well as in Germany, The Netherlands, Japan and two tours in Viet Nam. His awards included the Bronze Star with Oak Leaf Clusters. Jim is survived by wife Anong and family member of Gardena, brother Robert and family of Dallas, TX, sister Peggy of Temple, TX and many nephews and nieces survive. Jim was pre-deceased by his parents, brothers John and Charles. Military services are June 26 at 11: 15 AM, at the National Cemetery in Riverside, California