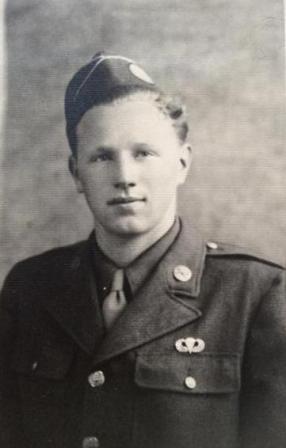 James David Addis August 9, 1924 – January 26, 2014 James "Jim" Addis of Torrance departed this earth to be with the Lord on Sunday, January 26, 2014. He was 89. Jim grew up in the Lincoln Heights section of Los Angeles CA and attended Lincoln High School where he excelled in athletics and was recognized for his prowess on the football field. Directly after graduating from high school Jim did not hesitate to answer the call of his country by joining the Army to fight in World War II. He volunteered to be a paratrooper and served with the 504th Parachute Infantry Regiment of the 82nd Airborne Division where Jim saw combat action in North Africa and throughout Europe. Though still a teenager for much of the war, Jim made combat jumps into Sicily, Italy, Holland and Germany to fight in several key campaigns including the Battle of the Bulge. At one point he was captured by German soldiers but had the good fortune of being released as the German commander recognized the end of the war was at hand and more casualties were fruitless. Once released, Jim helped liberate the Auschwitz concentration camp and assisted displaced persons in Berlin. Like many of the Greatest Generation, Jim was reluctant to discuss his war exploits maintaining he was just doing his job. The rest of us remain in awe at the sacrifices made by this humble hero. Returning to the states after the war, Jim held a number of diverse jobs including stints working on the railroad, as a grocery store butcher and in a metal fabricating shop. While working at the latter, Jim met his first wife Iris Freeman who he married in 1950. Eventually settling in Torrance, Jim and Iris raised two children while pursuing a career in aerospace. Jim worked for several firms but enjoyed his longest tenure with TRW. Jim retired from TRW in 1992 and began his retirement by relocating to the Central Coast. After Iris passed in 1994, Jim began travelling with other TRW retirees and soon met Betty Kay, another long time TRW employee, who became his second wife in 1996. For many years Jim and Betty traveled and socialized extensively. They were also very active in the TRW retirees groups, the Torrance Craftsmen's Guild and their church. They enjoyed giving back by participating in the Shared Bread outreach to feed the homeless and contributing to numerous charities. Jim was also instrumental in helping start another outreach to provide meals to the homeless sponsored by their church. Jim was always highly energetic and loved to hike and walk. Even in his later years, he could be seen walking his neighborhood, often with his dogs that were also a big part of his life. Another passion was art and Jim was talented in a number of media most notably stained glass. Many of his works were given to family and friends and remain treasured reminders of this warm and generous man. He is survived by his wife Betty of Torrance; daughter Cara Lung and husband Dan of Wildomar CA; son Scot Addis and wife Debbie of Buford GA. Jim had three grandchildren Chanda, Shanna and Jimmy; and five great grandchildren Joseph, Emma, Nicholas , Dayna, and Julia. James, Jim, Dad, Grandpa was loved and respected by all. He will be greatly missed by many who honor his legacy of service, compassion and generosity. Services for Jim will take place at Rice Mortuary located at 5310 Torrance Blvd. in Torrance. A viewing will occur Monday February 3, 2014 from 5 to 9 PM, and the funeral will take place on Tuesday February 4, 2014 at 2 PM. In lieu of flowers donations may be made to Shared Bread homeless outreach http://www.fumcrb.org/bread, or the Wounded Warrior Project https://support.woundedwarriorproject.org/default.aspx?tsid=72&campaignSource=WEBSITE&source=ONLINE.