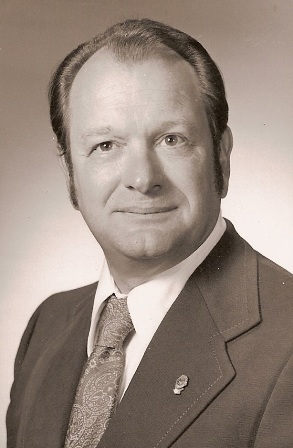 James "Jim" Burrow Reinhardt, 88, of Torrance went to be with our Lord on April 12. Jim was born in Oak Park, Illinois on December 5, 1927. He graduated from El Monte High School and received an Associate's degree from Pasadena City College. Jim was married to Kathryn Reinhardt on November 25, 1950; they were married sixty-five years. He was a veteran of the Korean War and served in the Army. Jim owned Reinhardt Insurance, was a devoted member of South Torrance Lion's Club, and a member of St. Andrew's Presbyterian Church. He loved fishing with his twin brother Gil, cheering for the USC Trojans, golfing, serving the homeless, and spending time with his family and friends. Jim is survived by his wife Kathryn Reinhardt, children John (Patricia) Reinhardt, Ann (Kenny) Blanks, James Reinhardt, son-in-law Thomas Cox, eleven grandchildren, and fifteen great-grandchildren. Jim is preceded in death by his brothers Robert and Gilbert Reinhardt, daughters Roberta Reinhardt and Mary Cox, granddaughter Apryle Schmidt, and great-granddaughter Leah Klug. A service will be held Friday, April 22 at 11am at St. Andrews Presbyterian Church in Redondo Beach. Donations may be made to Lions Wilderness Camp, for deaf children, www.lionswildcamp.org or Juna Amagara, www.amagara.org, designate MCPS.