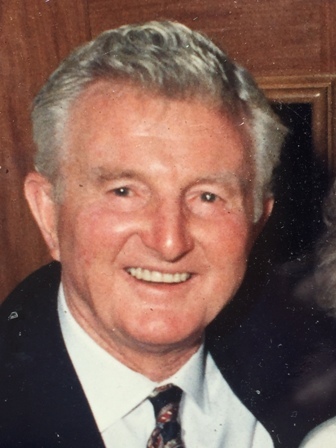 Stewart, John Wellington "Jack" was born on December 2, 1925 and passed away at home on February 27, 2017. He leaves behind his wife of 65 years, Karen (Frayne) Stewart; son Kelly and wife Kim; daughter Tara; son Matt and wife Andrea; son John; daughter Mary; two granddaughters Stephanie Gregg and Hannah Stewart; two great-grandsons, Patron and Presley Gregg. Jack was predeceased by his son Joe, and daughter-in-law Deborah. Jack is a Navy Veteran of World War II, and was on the last ship to be attacked by kamikaze at the end of the war. He attended Saint Monica's High School('44), Loyola University and USF. He retired from Mobil Oil after 35 years. Funeral Services on Saturday, March 4, 2017 at St. Anthony's Catholic Church in El Segundo, Ca. Viewing at 10:00am, Rosary 10:30am, Funeral Mass at 11:00am. Burial at Holy Cross Cemetery with a reception following at St. Anthony's Parish Hall.