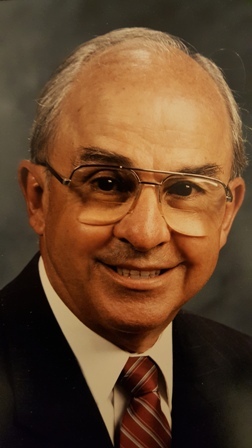 Jack L. Ferrell July 8, 1927 – May 11, 2015 John "Jack" Louis Ferrell, 87, of Rancho Palos Verdes, passed away peacefully Monday evening, May 11, 2015 of pneumonia. He was born in Cleveland, Ohio, on July 8, 1927, to Louis and Clara Ferrell. Jack graduated from the Benedictine High School in Cleveland, Ohio. He met his beloved wife Rosemary while attending John Carroll University. He studied and earned a Bachelor of Science in Manufacturing Engineering from Carnegie Institute of Technology at Carnegie Mellon University. He enjoyed the camaraderie of the Delta Upsilon fraternity. He served in World War II in the Pacific Theater in the Navy on USS LCS (L)-51 from 1943-45. He became a Grand Knight of a local chapter of the Knights of Columbus in Ohio. He began his career in manufacturing at Cleveland Graphite Bronze, Racine Hydraulics, and Parker-Hannifin. He was also employed by TRW REDA Pump working with the manufacturing and implementation of water and oil pumps in the Midwestern United States as well as advised many manufacturing processes in China and the Middle East. He was also employed at TRW rising to Vice President of Manufacturing and Systems, for the Space and Defense Sector. He acted as President of the Society of Manufacturing Engineers and Chairman of the Board of the Friends of Cabrillo Marine Aquarium where he was integral in acquiring funds to expand the educational space. He is now Director Emeritus alongside John Olguin at the aquarium. He then served the California Polytechnic University at San Luis Obispo as a member of the President's Cabinet, and was the founding Executive Director of the California Manufacturing Technology Center for Los Angeles County. He truly loved mentoring the educational excellence and development of others and fostered an environment of learning. He notoriously said many a time he brought home a report card with a string of A's followed by an F (in behavior). An avid sailor and golfer, he was most at home on his cherished sailboat Sea-Du-Cin and enjoyed golfing with the Grumpy Gramps and his grandson. A humble, loving, and humorous man of integrity and intellect, he lived a rich and fulfilled life having experiences so broad and memories so unfathomably deep, he loved to tell his stories and pull his famous one-liners. He traveled the world and was involved with global influence of manufacturing and technology. When faced with a challenge, he would ask himself, "What's the worst that could happen?" and offered the same question to others asking him for advice. His wife of 64 years, Rosemary; sister, Carolyn Rice; daughter, Kathleen (James) Yinger; son, John (Rena) Ferrell; three grandchildren, Cynthia Ferrell, Sean Ferrell, and David Yinger; and one great-grandchild Caleb Ferrell survive him. He will be greatly missed by all those whose lives he touched and those who admire him. Visitation is from 2 to 4 p.m. May 31 at Rice Mortuary in Redondo Beach followed by a prayer service. The Funeral Service will be held at 1 pm, June 1 at St. John Fisher Catholic Church, Rancho Palos Verdes. The family of Jack would also like to extend our most heartfelt gratitude to the army of caregivers who helped to lessen his suffering over the past year and a half provided by Always Right Home Care and Comfort Keepers. In lieu of flowers, donations to the Cabrillo Marine Aquarium and the Alzheimer's Association in his memory are appreciated.