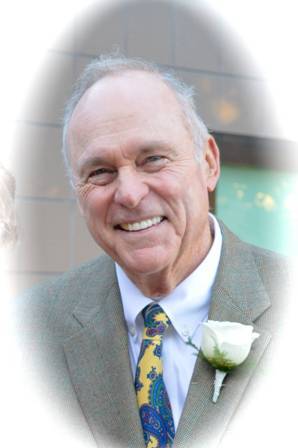 Jack Bradshaw November 27, 1938 – April 30, 2015 Jack Bradshaw passed away peacefully on the evening of Thursday, April 30 in his home in Palos Verdes, California. Born in Los Angeles to Jack and Claire (Straeten) Bradshaw, he attended Los Angeles High School, class of '56, and then the University of Southern California, class of '60, and majored in Political Science. He was President of his fraternity, Psi Upsilon, and active in Knights, a service and spirit organization. After spending two summers at Naval Officer Candidate School in Newport, Rhode Island, he was commissioned as an officer in the United States Navy. He then served the next two years aboard destroyer USS Richard S. Edwards DD950, followed by a year in Tactical Air Support Squadron 13 with three West Pac tours of duty. Despite the fact that his college sweetheart was a UCLA Bruin and not a Trojan, Jack married the love of his life, Marion Ashlock on October 14, 1961 at St. Mel's Catholic Church in Woodland Hills. After one year of UCLA Law School, Jack followed in his grandfather's and father's footsteps and committed himself to running the family business, Jack Bradshaw Dog Shows, started in 1898 by his grandfather, Jack Bradshaw. Anyone showing American Kennel Club registered pure bred dogs over the last ten decades will recognize the Bradshaw name. Jack and Marion superintended American Kennel Club dog shows in California, Arizona, and Nevada for over fifty years. They had many friends at the shows and truly enjoyed the people and the camaraderie of the sport. In his professional life, Jack was admired for his calm demeanor, good judgment, fairness, and honest behavior. He was a gentleman and trusted friend and set an example for all of us who knew him. Away from work, Jack was a lifelong tennis player –"squeeze the racket, move your feet and win the last point" were his initial commandments of tennis. The "R-word" (rain) was never uttered in the house on tennis days, because it prevented his tennis matches which he always enjoyed. Jack enjoyed playing and watching all sorts of sports, especially USC Football and Basketball with his son, John. He was a loyal fan of his kid's and later, grandkid's teams. Jack loved the beauty of the ocean and sailing. Family vacations were treasured. Yosemite, Mexico and Hawaii were favorites, but trips to Europe and China were also treasured. Jack was an easy-going person who enjoyed dark chocolate, popping a bottle of champagne, watching sunsets and taking walks. Jack is survived by his loving wife of 53 years, Marion, their daughters Susan (Keith) MacLyman, Julie (Marty) Draper, Eloise (Quinn) O'Donnell and son John (Hilda) Bradshaw, nine grandchildren, Zach, Evan, Claire, Olivia, Jimmy, Finn, Emory, John and Mark and his two sisters, Barbara Bradshaw and Jill (Phil) Sidran. The funeral mass will be celebrated at St. Lawrence the Martyr Catholic Church in Redondo Beach on Thursday, May 14 at 10 a.m. In lieu of flowers, donations may be made in his name to the American Cancer Society. Jack was always the gentleman and a gentle man who continued his legacy of kindness to his final days. His family, friends, tennis buddies and employees will miss him and his gentle nature, appreciation of life, honesty and good humor. Enjoy what you love in life, and remember a great gentleman, Jack Bradshaw.