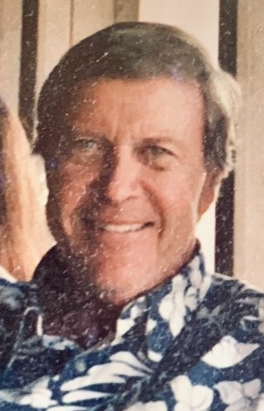 Jack Miehls 83, passed away in his Redondo Beach home in the late hours of August 1, 2021 by the side of Barbara, his loving wife of 37 years.

Jack loved living near the ocean. He grew up in Santa Monica and graduated from Saint Monicas High School then onto Santa Monica City College before getting his degree from UCLA. He played on the baseball, basketball, football and swim teams for Saint Monicas and later was on the SMCC swim team. During the summers he was a Santa Monica Life Guard. He also served in the Army Reserves.

After college he found work as a model and actor in print and television commercials. During that period he briefly lived in Manhattan, NY before returning to the beaches of Southern California (Manhattan, Redondo, Playa Del Rey) and the beginnings of a career in real estate with Dart Industries, then on to a career in commercial real estate with The Bruce Hanes Company. From there he kept his Broker’s License with long time friend and business partner Eldon Griffis at the E.R. Griffis Company in Torrance.

Those years brought a successful marriage to his wife Barbara in 1983 followed by the birth of their daughter Jackie and son Christian. Those happy parenting years expanded Jack’s resume to include volunteering as an AYSO soccer coach for both children’s teams and coaching Riviera Little League teams. He was also an enthusiastic member of the South High Baseball team Boosters Club and their Christmas tree fundraisers.

Jack Loved sports. Fall weekends revolved around tailgating to UCLA football games or watching the away games with friends at home. He was a fan of the Angels, the Dodgers, the Lakers and the LA Kings. Every summer it was off to Manhattan or Hermosa Beach for the Taplan Life Guard Competitions. He liked to watch swim meets on TV and occasionally visit the Southern California campuses for a live competition. Olympic swim competitions were never missed. As long as he was able he swam laps in his backyard pool.

Besides sports Jack adored live theater, whether at the Ahmanson, or more intimate venues. He enjoyed picnicking at the Hollywood Bowl and attending and exploring the wide range of cultural events that living in Los Angeles afforded. Like Randy Newman He Loved LA!

His passion for travel reawakened once the children were old enough to appreciate the experience. Both children grew up to be enthusiastic travelers.

A stroke in the spring of 2015 led to Jack’s semi-retirement. However, after a heroic rehab effort, Jack’s suitcases were packed and he and Barbara traveled extensively until mobility issues and the later stages of dementia ended that leg of the journey. To the end Jack was a sweet, loving man with an affectionate and playful nature and always an optimistic outlook. He is survived by his wife Barbara, daughter Jacqueline (David) Opel, son Christian, grandson Jack Opel, his sister Marilyn (Lucky) Cole, nephew Chris Cole and nieces, Lauren, Michelle and Monique.

An outdoor memorial service will be held on Saturday, August 21. For details, email JackMiehlsMemorial@gmail.com.

Lighthouse Memorials is inviting you to a scheduled Zoom meeting.