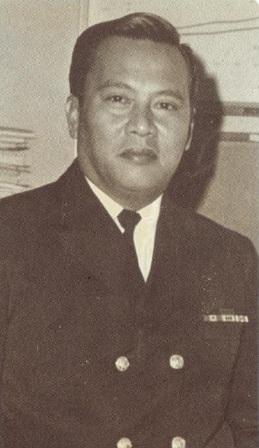 Isabelo Palma Bonoan November 19, 1929 – July 9, 2013 Isabelo Palma Bonoan also known as "Bel" was born on November 19, 1929 to Leon and Theresa Bonoan in Laoag City, Philippines. He was the youngest boy of 16 children. He studied Architecture in college and joined the U.S. Navy on May 5, 1954. Through a lot of hard work, dedication, and perseverance, he rose to the ranks of Chief Petty Officer during an era when minorities were considered second class citizens in this country. Chief Bonoan received a National Defense Service Medal, a Vietnam Service Medal with one bronze star, and a Vietnam Campaign Medal. During his 23 year Navy career, he married Rosario Siazon, also from Laoag City on April 2, 1961 in San Francisco, California. On August 17, 1966, they welcomed their first born, James, in Laoag. After 4 years, they expanded their family with the birth of their second son, Ronald, on September 11, 1970 in Long Beach, California. With no plans to have more children, Bel and Rose were pleasantly surprised with their third child and only daughter, Michelle. She was born on June 3, 1975 in Okinawa, Japan. On January 31, 1977, Chief Bonoan received Honorable Discharge from the U.S. Navy. His devotion and loyalty to this country led Bel to pursue a career in the Federal Government. He continued his service to this country with a successful 16 year career at the Long Beach Naval Shipyard. Bel's civic leadership activities included Commissioner for Veteran Affairs, City of Carson; Past-President and member of the Fleet Reserve Association, Branch 302; and member of Laoag City International Circle, Laoaganian Association of Southern California, Pilipino American Alliance, and Filipino Community of Carson. Bel was blessed with three grandchildren - Jenica Rose (8), Jana Frances (4), and Grayson Mwewa (1). He was loved by many and he always made people feel good around him. He was kind, funny, and incredibly patient, modest, and humble. He was a sports enthusiast, an avid gardener, and had a penchant for fatty foods and good wine and spirits. He was also known for his vocal talent and was able to serenade in English, Tagalog, and Ilocano. Bel had a quiet demeanor but came alive around people and at social gatherings. He always made a lasting impression on people. He went out of his way to learn about people and entertain them. Everyone genuinely loved him, and he was a "favorite" for many. Bel was a great patriarch to the Bonoan family and always had the best intentions for his children.