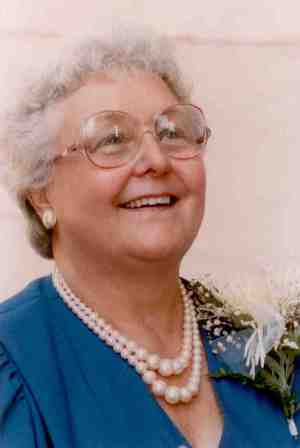 Irene passed on to the fullness of life in God's love at home in her daughter's arms on June 2, 2012. She was a resident of Manhattan Beach for the past twenty years and a faithful member of the American Martyrs Catholic parish community. Irene was the mother of six children, whom she raised in Pittsburgh, Pennsylvania, with her loving husband Alfred Regotti -- who preceded her in death by twenty years. She was one of 13 children in her family raised in Bobtown, PA, and took pride in calling herself "a coal miner's daughter." She is survived by only one sibling, Pauline Pesosky, of Cleveland, OH. Although she worked as a professional milliner and seamstress for many years before having children she stated that she would like to be remembered as a homemaker, which she considered the crowning achievement of her life. She is survived by five of her six children (son Thomas died at 33, twenty one years ago): Benjamin, a Capuchin Franciscan Friar; Judy and her husband Stephen Alexander and sons, Daniel, Michael and Thomas; Alan and his wife Stacey Regotti and their daughters, Emily, Catherine and Julia; Joseph and his wife Jean Walsh and their daughters, Hannah and Maria, and Hannah's son Brandon; and Paul and his partner Marta Gonzalez and their son Paul. Irene was married to William Sullins for a brief period before his death in 2000. Irene's family requests that, in lieu of flowers, donations be made to the Catholic missionary organization to which her son Joseph belongs: Maryknoll Lay Missioners, PO Box 307, Maryknoll, NY 10545. Or donate online at www.MKLM.org. Visitation and the funeral mass are at American Martyrs Church, at 624, 15th St., Manhattan Beach, CA, on Tuesday, June 5. Viewing will take place beginning at 9:00 a.m., followed by the mass at 9:30 and immediate procession to Holy Cross Cemetery, followed by luncheon back at American Martyrs.