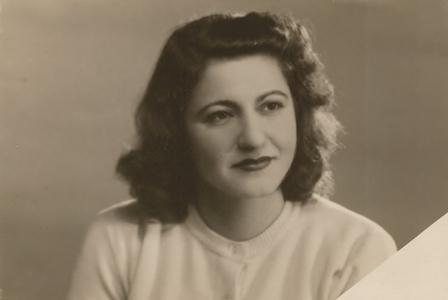 Irene Kattan August 27, 1923 December 5, 2013 Irene Kattan (Rene), age 90, passed away on December 5, 2013. Rene was born in Collipulli, Chile on August 27, 1923. She was the first of five children born to Jacob Hasbun and Olga Hakim Hasbun who had traveled to Chile from Bethlehem to start a business. At the age of 6, Rene and her family traveled by ship (a very old decommissioned battle ship) from Chile to Guatemala. She often told the story of how tough it was on her mother to travel that distance for fourteen days, on an old ship with five very young children. In 1946 at the age of 23, Rene's family moved from Guatemala to Palestine by train and battle ship. They remained in Palestine for just a short period of time. The home they lived in was bombed and destroyed during the Palestinian war. Rene and her sisters would tell the story of fighter planes dropping bombs over their home. Rene suffered shrapnel wounds during one attack as she grabbed her mother taking her to a safer location in the home. Not surprisingly, the family decided to leave Palestine and head to Damascus, Syria early 1949. Rene married John Kattan in Damascus on July 12, 1952. They lived there for several years, where their daughter Lillian (Lilo) and son Rudolph (Rudy) were born. Life was hard in Syria, and John was very worried about the political environment. He convinced Rene they should move to the United States for a better life. Rene struggled with the decision, because it meant leaving her beloved mother, father, brothers and sisters behind. The Kattan family fled Syria and landed in New York City on the 4th of July, 1959; Rene was seven months pregnant with her youngest son Robert. In those days, refugees had to be sponsored by US citizens for entry into the States. John's nephew, Emilio Kattan, sponsored the family thus the Kattan family started their new life. Rene and her two young children did not speak English; as such Rene often conveyed the difficulties she experienced until she could speak English. Being 36 years old when she came to the States, she never lost that distinct, sweet accent that many hold in their hearts and minds today. Rene was an amazing wife to John, who suffered 20 years of multiple sclerosis until his death in 1985. She selflessly took care of him without ever complaining and still managed to love and care for her three children. John died a little over a year before Rene's first grandchild, Jennifer Craig, was born. Rene was overjoyed by the birth of Jennifer in 1986! She dedicated herself to helping Lilo and her husband, Steve, care for baby Jennifer. Her second grandchild, Scott, was born in 1989, and Rene delighted in his birth as well. More joy arrived when her son Rudy and wife Vicki gave her grandchild number three, Eric, born in 1991 followed by Amy, in 1998. Nothing made Rene happier than caring for her grandchildren and they adored her. She was more than a grandmother or "Teta" to them; she was also a second mother. She would take Jennifer and Scott to school; pick them up, color in coloring books, play games, play one-on-one basketball and dote on them endlessly. Rene was an amazing cook and she loved cooking for Lilo's family. Every day, the family would come home to the most memorable aromas of traditional Arabic meals. Friends and neighbors were envious of the kibbe or warak dawali dishes created by Rene. Every day, thanks to her, the Craig family sat down to lovingly prepared meals and Teta would smile as everyone raved about her cooking. We felt so lucky; so graced. In 2006 Rene's health took a turn. Alzheimer's came into her world with a vengeance. After living with Lilo for a couple of years, it became necessary to move our dear Teta to assisted living in 2008. When she entered the home, she was in very poor health and no one thought she would last long. But as Rene did many times in her life, she rallied. With the care, kindness and attention she received at Windsor Gardens in Hawthorne, she became one of the happiest, most engaging residents. Always smiling, always conversing, always happy and loving, she was elected president of the residents' association. The social services director told our family, "your mom has an opinion about everything;" and she did! Our family is so grateful to Teta's doctors and to the Windsor Gardens staff; we are sure Teta would never have lasted and thrived as long as she did without their care. The work the doctors and Windsor Garden employees do is not easy, but they do it with the utmost care and patience. God bless them all. Rene Kattan is survived by her two younger sisters, Elena de Nissaire and Maria Hasbun of Guatemala, her daughter Lillian Kattan Craig of El Segundo, her son Rudolph and his wife Vicki Kattan, her son Robert Kattan of Hawthorne as well as her grandchildren: Jennifer Craig, Scott Craig, Eric Kattan, and Amy Kattan. Rene was preceded in death by her husband John, and her two younger brothers, Salvador and Jorge Hasbun. Funeral Mass Friday, December 13, 2013 at 1230PM at Holy Cross Cemetery, Risen Christ Chapel with committal in Holy Cross Cemetery, Culver City, CA. In lieu of flowers, memorial donations may be sent in her name to: Catholic Charities of Los Angeles, Inc., Our Lady of the Angels Region 211 3rd Ave., Venice , CA 90291 Attn: H. BRIONES, Regional Director