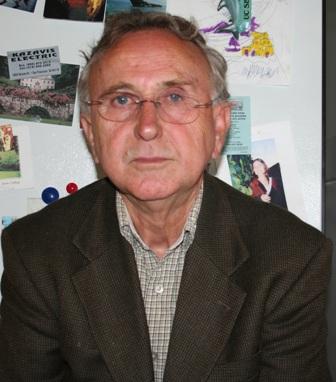 Ioannis G. Kostoulas, known to friends and family as "Yannis," passed away on February 1, 2013 after a 10-year battle with ocular cancer. He had both an artist's eye and scientific mind. Born in 1936 to very humble beginnings in a small village on Mount Olympus, he was the first person in his entire family and village to receive a college education. After getting the third-highest score on Greece's college entrance exams, he attended Aristotle University of Thessaloniki, Greece where he received a dual degree in Mathematics and Physics. He came to the US in 1964 on a scholarship to University of Alabama, where he received a Masters Degrees in Physics. He then went on to University of Rochester where he earned a second Masters and PhD in Physics. He wrote and collaborated on over 80 scientific publications all before the age of 40 and did significant research on neutrinos and muons. Two of the projects he worked on were nominated for the Nobel Prize. As an academic research scientist, he worked at MIT, UCLA, UC San Diego, UC Berkeley and at the Berkeley Cyclotron. He also did research at Michigan State University. He worked at Fermi Lab from 1975-1980. He also worked at Los Alamos National Lab during that time. He then moved to Los Angeles in his forties where he shifted from high-energy particle physics to learning aerospace engineering from the ground up. In his aerospace career he worked as a senior physicist for McDonald Douglass, The Aerospace Corporation, TRW, Northrop Gruman, Boeing, and Hughes. During his tenure in aerospace, he was called on as an outside consultant and averted a nuclear incident for which he received commendation. He retired from aerospace and went on to do his hobby full time—designing and restoring historic buildings in LA. Growing up during the Greek Civil War always left an impression on him. Political activism has always been a part of his life. He was jailed in Alabama during the civil rights movement as a grad student. He loved to read and discuss politics and international relations. He belonged to various Greek-American organizations and was a resource for democratic politicians on Balkan culture and politics. He was a lover and defender of Hellenism and Greek Culture. He served as president of many Hellenic-American organizations including Ahepa, Hellenic American Council, and the Pan Macedonian Association. After speaking Greek and English fluently, he then learned Spanish in his sixties. He led politically informed hikes in Griffith Park in his seventies through the Sierra Club. He was an avid listener of Public Radio International. He had always had a great love for Greek Macedonian folk music with clarino, and loved to sip a glass of tsipouro now and then which his brother made. He led a full and active life up until the end. He is survived by his wife, Katina Kostoulas daughter and son-in-law, Alexandra Kostoulas and Ted Andersen and brother Kostas Kostoulas, sisters Marina Babbi and Anna Kostoulas in Greece. There will be a Trisagion service for him at Rice Mortuary in Torrance on Thursday February 7th at 7pm. Funeral services will be held at St. Katherine's Greek Orthodox Church in Redondo Beach, Friday February 8th at 10am.