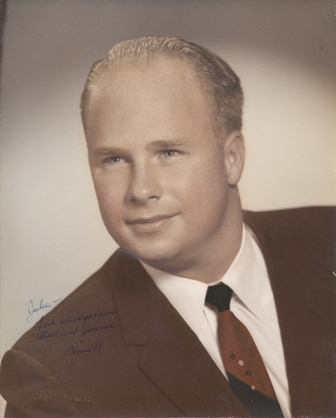 Howell Blair Dyson passed away, peacefully at home in Torrance, on Friday March 28, 2014, at the age of 82. He was a 54 year resident of the South Bay. He was born in San Diego, California on March 9, 1932 to R. Adm. Howell J. and Helen Dyson, who have preceded him in death. He went on to live in many locales as a child including Lahaina, Maui, and Corpus Christi, Texas, before settling in Westchester, CA in the late 50s. He met and then married Julie Ann Myers on July 2, 1960. Howell started his long time career as an electrical engineer with The Aerospace Corporation. During his time there, he participated in the development of antenna systems for space travel and aeronautics, including his favorite, the SR-71 Blackbird. In retirement, he had the opportunity to travel with his wife to Australia, New Zealand, South Pacific Islands, South America, Alaska and Europe. He was an enthusiast of all things weather related. He prided himself on his beautiful rose garden. He is survived by his wife, Julie Dyson of Torrance, CA; daughter Peggy Coomans and husband Greg of Chandler, AZ; and daughter Dr. Elizabeth Magnabosco and husband Anthony of San Antonio, TX. He leaves four grandchildren, Alex, 22, Paige, 18, Ava 12, and Jackson 9. The Memorial Service will be held at Rice Mortuary on Saturday April 5, 2014 at 10:00 am. A reception follows in Rice's Lighthouse Reception Room until 1:00 pm.