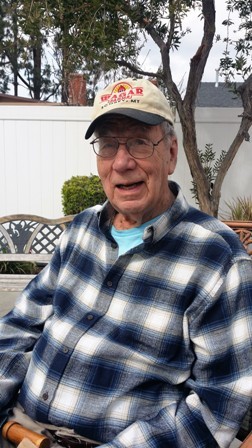 Howard Wagar was born March 2, 1921 and was raised on a farm in NE Montana where he lived and worked with his parents and 2 brothers. He graduated High School in 1939 and later attended college in Bozeman, MT where in 1943 he earned a Bachelor of Science in mechanical engineering. He served in WWII as an Aviation Cadet in the South Pacific and received an honorable discharge in 1946. His first wife, Ozey, had been widowed and had 3 older children with families of their own. These children and grandchildren grew up knowing him as Grandpa Howard. He met his second wife, Peggy, in the early 60s while they were working for the same company. Peggy had a young daughter and later Howard and Peggy had one son. Howard worked as a plumbing estimator drawing plumbing plans and pricing their installations. After retiring from this he went into teaching where he shared his knowledge of plumbing with new apprentices. Having finished his time teaching he spent time at home, traveling, and attending local concerts and plays. We would like to thank the caregivers of West Coast II for their love and attention during his time with them. In lieu of flowers please consider a donation to Montana State University Alumni Foundation Services will be held on Thursday September 1, 2016 at 11:30am at Rice Mortuary 5310 Torrance Blvd, Torrance, CA.