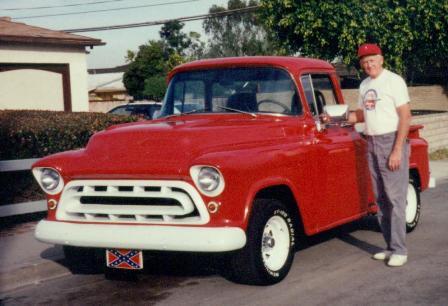 Howard L. "Dick" Dickinson 1929 - 2015 Dick Dickinson was an icon cruising the South Bay in his red classic '57 Chevy pick-up "Big Bertha" until stricken with Alzheimer's disease about five years ago. Dick and his beloved Dee have enjoyed living in their Manhattan Beach home for almost 50 years, although the last few years he has required care at Sunnyside Nursing Center in Torrance. He went home to the Lord on February 26, 2015. Dick was a life-long athlete, excelling in football and basketball and later contributing his skills and passion to umpiring youth baseball and refereeing high school football to keep involved in sports. He was a charter member of The Spectrum Club of Manhattan Beach and worked out and played basketball there until into his 80's. "The Big Guy" was a good friend and neighbor and loved by all who knew him. He will be missed for his unconditional support of friends and family, his enthusiasm for life and his unwavering devotion to the Lord. Dick was an enthusiastic and active member of St. Andrew's Presbyterian Church, Redondo Beach. He served as an Elder in the church and many newcomers and members were always greeted warmly and affectionately at Sunday services by him. Dick was also a prayer warrior who attended and actively contributed to the Wednesday morning Men's Bible Study. He served in the U.S. Navy at the end of WWII. He worked in the aerospace industry and retired from Teledyne Controls in Santa Monica. In his retirement, he met his pals at Peet's Coffee and avidly played golf at Los Verdes Country Club and resorts around the country including Hawaii, Canada and St. Andrew's in Scotland. Dick and Dee have had a wonderful life traveling the world together. There will be a memorial service celebrating his life on at Sunday, March 8, at 2:00 pm at St. Andrew's Presbyterian Church, 301 Avenue D, Redondo Beach, CA 90277 on with a reception following.