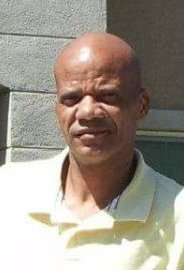 Howard Andre Johnson III "Bucky" passed away on June 19, 2016 at the age of 55 in Lancaster, CA. He was born on May 2, 1961 in Los Angeles, CA (the fifth of eight children) to Hallie Johnson (Green) and Howard Johnson II. Bucky graduated from Banning High School in 1979. He worked at Aerospace making parts for planes in Gardena, CA. He then acquired his license to become a truck driver, which he loved. He has always been good with his hands. He enjoyed fixing and building whatever he could get his hands on. From something as easy as a bike to more complicated as rebuilding a computer. If he didn't know how to fix it, that wouldn't stop him because he would just teach himself. He enjoyed cooking, eating, spending time with his friends, and music. To him cooking was a way to put a smile on someone's face. Seeing someone devour your creation brought joy to his heart. He was overjoyed just to spend time with his friends. His friends are family to him. There was always respect, always comradery but most of all love. Bucky was obsessed with music, it didn't matter the type. He loved singing and making beats. Music was his passion his heart beat. He loved the funk, the structure, but most of all the rhythm. He could listen to music for hours and never get tired. Music was his soul his happy place. Bucky was a Christian who knew Jesus Christ Our Lord and Savior. A person who would not allow someone to go without, especially when he had the means to provide. He always had a positive attitude and a bigger than life personality which made him cherished by many. Some people did not understand him but agreed with his reasoning on why he did what he did. He was a philosopher, a Genius, a son, a father, a brother, and a down to earth dude that would tell it the way it was without sugar coating it. He was often imitated but he could never be duplicated. If you had the privilege to meet and really know Bucky, you have accomplished something unforgettable. He will be deeply missed by his family, friends, and all who knew him. Bucky leaves his daughter, Andrea Hansbrough, sons Howard Andre Johnson IIII "A.J." and Michael Luis Johnson, grandsons Bryant Jr., Bryce, Michael Blake, granddaughter Cassidy as well as the mother of his children, Michelle Johnson. He's also survived by his siblings Deborah (Debbie), Robert, Sandra, Wilma (Deanie), Felicia, Troy, Mark; and nieces and nephews. Predeceased by his parents Howard Johnson II and Hallie Johnson (Green). Rest easy YOU are LOVED.