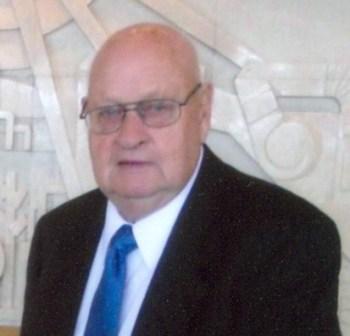 Homer H. Evenson September 22, 1923 - May 26, 2012 The family of Homer H. Evenson is sad to announce his passing at the age of 88. Homer was born in Walker, Minnesota on September 22, 1923, to Marie and Henry Evenson, the 7th of eight children. Homer served his country in the Army during WWll. After his discharge, he moved to California and worked for Hughes Aircraft prior to forming his own company in 1956. From 1970 until his retirement in 2008, he owned and operated Universal Screw Products, Inc. in Torrance, California. In 1950, he married Mary Ann Zigmunt who preceded him in death in 2007. Homer is survived by his two daughters, Linda Christine Flanagan (Michael) and Barbara Shank (Ken). He also leaves behind six grandchildren: Sean, Laura, Francesca and Kieran Flanagan; John and Kirsten Shank; and much loved nieces and nephews. Homer enjoyed fishing, hunting, golfing, playing cards, traveling and was an avid fan of the Los Angeles Dodgers. He was a member of the Gardena Elks #1919 and was recently honored for 55 years of membership. Homer also belonged to the Redondo Beach Elks and the American Legion Post #0184. Homer loved life and lived it to the fullest. As such, we will be celebrating his life on Sunday, June 3, 11:00 a.m. at the Gardena Elks Lodge, 1735 W. 162nd Street, Gardena, California 90247. Homer will be missed deeply, thought of often and loved always by his family and friends.