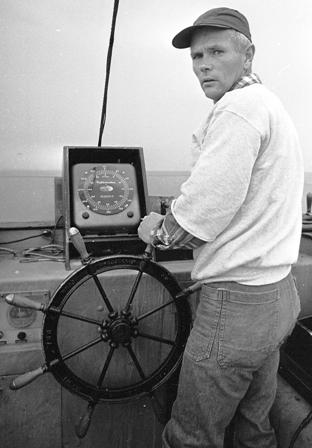 Herbert (Herb) Max Mueller July 10, 1922 – July 17, 2013 Herbert (Herb) Max Mueller, a father, grandfather, and great-grandfather died peacefully at his home on July 17, 2013. He was born in Lennox on July 10, 1922 and at an early age moved to Hermosa Beach. He graduated from Redondo Union High School in 1941 and married his high school sweetheart (Edythe) in 1943. Edythe preceded Herb's death in 2008. They built their Redondo home in 1945 and were residents there for 68 years. He leaves behind two sons Chris (Barbara) Mueller and Glenn Mueller; grandchildren Kristi (Jon) Thompson, Lori (Tom) Barber, Sandy (Dave) Richards, Jeffrey and Scott Mueller; and six great-grandchildren (Kylie, Emmy, and Andrew Thompson) (Chance and Adelaide Barber) (Reagan Richards). During his high school years, he worked on the sport fishing boat the Irene F out of Hermosa Beach. Under the helm of Paul Froude, he learned how to fish, catch bait, and sew nets. Herb proudly served his country in the Navy on an LCI (G) during WWII. In his later years he found comfort sharing his stories about how the rocket gun boats supported landings in the Philippines, Marshall Islands, Guam, and Okinawa. After being discharged as a first class boatswain's mate, Herb returned home and continued to follow his passion with boats and the sea. He ran the bait boat Donna K, which hauled bait for 22nd Street Landing and all the smaller private boats in San Pedro and Long Beach. He also provided anchovies, sardines, and mackerel to the canneries. When fishing was slow, he worked as a certified welder for Todd Shipyard. He also ran the passenger ferry Ace from San Pedro to Terminal Island. They carried hundreds of cannery workers back and forth before the Vincent Thomas Bridge was built. After the ferry was no longer needed, Herb was one of the first employees to work for THUMS in Long Beach where he ran the VIP boat, crew boats, and tugs taking crews and supplies to the oil islands. After retiring from THUMS in1986, he was often seen down at the dock helping his son (Glenn) with his half day fishing boat the Redondo Special. In addition, he created a part time job of sewing nets. Fishermen from all around would call in their special order for Herb's one of a kind nets. Herb also enjoyed his yearly fishing trips to the Smith River where he met up with old time fishermen and always caught his share of steelhead. Herb was a fishing legend and was respected by all who had the pleasure of working for him. He will be missed by all. A small private service will be held, however, a larger celebration of life party will take place at a later date. If desired, donations can be made to the Veteran's Association.