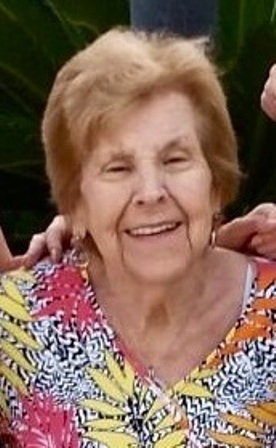 Helen Scalabrini, a 60 year resident of Redondo Beach, CA, passed away on Sunday, August 13, 2017, in Los Angeles, CA. Born in Perryopolis, Pennsylvania, Helen was 93 when she died. She was very active in STAR, Inc. and the House of Yahweh charities. Helen is survived by her three children; Pam Broderick (Sean Broderick), Lori Blackwell (Ned Blackwell), and Gary Scalabrini (Jenifer Eslami). She also leaves behind four grandchildren, including Alexis Blackwell, Benny Blackwell, Jon Scalabrini, and Ella Scalabrini. Helen was one of ten children. She is survived by her sisters; Margaret Machupa, Pauline Karbowsky, Dorothy Bero, and Marlene Pritts, as well as her brother, Edward Behare. She was preceded in death by her husband, Ben Scalabrini, as well as her brothers, including William Behare, Alexander Behare, George Behare, and John Behare. A gathering of family and friends will be held on Friday October 13, 2017 from 6:00 pm until 9:00 pm, at Rice Mortuary, Torrance, CA. The Funeral Service will be held at American Martyrs Catholic Church on Saturday October 14, 2017 at 10:00 am. Burial will be at Holy Cross Cemetery in Culver City. A Celebration of Life will immediately follow at the Knights of Columbus, 224½ South Sepulveda Blvd., Manhattan Beach. In lieu of flowers, the family requests donations be made to STAR, Inc., at P.O. Box 1075, Torrance, CA 90505.