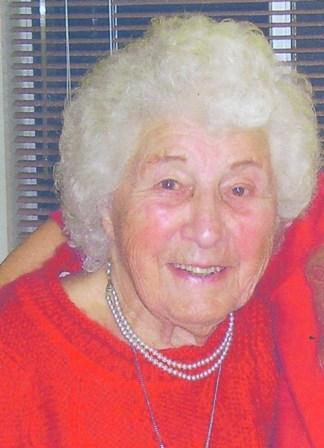 Helen (Jennings) Kilgore, 98, passed away in Torrance on August 31, 2012. Helen was born in Hospers, Iowa in November 1913. While she was still a young girl, the family moved to a farm in Canistoga, South Dakota. She was the fourth of ten children and the eldest daughter. Her schooling ended after eighth grade as she was needed at home. When she was 21 she headed out west to Los Angeles, CA and decided it was where she wanted to live. She met her husband, Tracy, on the boat to Catalina. They were married in Bremerton, Washington, as Tracy, who was in the Navy, was stationed nearby. They purchased their first and only home in Torrance in 1953. They thought they were moving to the country as the house was surrounded by dairy farms. She lived in this house until her death. Helen loved bowling and playing cards and did both as long as she was able. Her garden always had something blooming and she made the best Sour Cream Pie. She was very disappointed when she was no longer able to drive as it took away her independence. She was preceded in death by her husband Tracy Kilgore; her parents Irvin and Helen Jennings; brothers Robert Jennings, Raymond Jennings, Earl Jennings, Francis Jennings and Buck Jennings; and her sisters Ivadel Evans and Marie Lally. She is survived by her brother Jerome (Geraldine) Jennings; her sister Jean Johnson; daughters Patricia (James) Leko and Lynn Kilgore; grandsons James Leko and Jeffrey (Kellie) Leko; great granddaughters Abigail and Rorrie Leko and many nieces and nephews. Visitation will be on Wednesday September 5 from 10:00 am until 2:00 pm at Rice Mortuary, 5310 Torrance Blvd, Torrance, CA. Rosary is on Friday September 7 at 10:00 am, followed by Mass at 11:00 am. Both at Rice Mortuary. Burial is immediately following a Holy Cross Cemetery in Culver City.