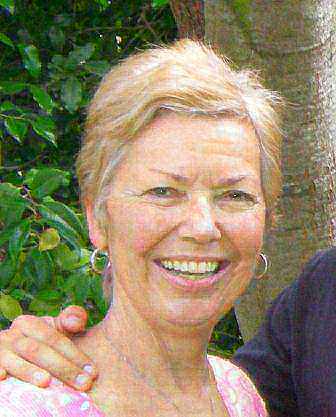 Helen Frances (Fran) Donohoe Pitts April 21, 1949 – Feb. 10, 2012 Fran passed away peacefully at home on February 10, 2012 after long and courageous battle with Corticobasal Degeneration (CBD). Devoted to her family, she is survived by her husband of 42 years Bob; son Brian; daughter Laura; and niece, Christina Sinn Brown, whom she helped raise. She is preceded in death by her parents, Phillip and Helen Donohoe and her sister Marianne Donohoe Sinn. Fran was born April 21, 1949 in Los Angeles, CA. She attended St. Catherine Laboure Grade School and Bishop Montgomery High School in Torrance where she met her future husband, Bob, through mutual friends. They were married in May 1969, and settled in Redondo Beach, eventually moving to the Palos Verdes Peninsula where they have lived for the past 34 years. Fran attended Collins Fashion Institute after graduating from high school, where she was able to pursue her interior design passion. She later enrolled at El Camino College and ultimately graduated from California State University, Long Beach in 1975. She began her working career at fashion retailer Joseph Magnin's and following her graduation from college, began working for Rockwell International and then moved to Garrett Airesearch (now Honeywell) in Torrance as an engineering liaison. She retired in 1985 to raise the children and began a second "career" volunteering tirelessly and enthusiastically at their church, St. John Fisher Catholic Church and National Charity League among others, before finding her true passion and calling as the founder of Palos Verdes Resale Thrift Shop in Lomita. In Aug. 2005 their doors opened and since then the shop has donated over $1.4 million to South Bay charities. Fran has been recognized by many groups for her volunteer efforts and was most proud of the Benemerenti Award for exemplary service to her church, family and community. This award, which she received from Pope Benedict XVI, was presented to her by Cardinal Roger Mahony at the Cathedral of Our Lady of the Angels in Los Angeles in Nov 2010. Fran was well known throughout the community for her beautiful smile, her sparkling eyes and her unselfish spirit. She was a friend to all, touching and inspiring many lives. Fran participated in clinical trials at the University of California, San Francisco Medical School where she received wonderful care as she searched for a cure for her disease. As a result of this care, she chose to donate her brain to help advance research into better understanding CBD, a very rare neurological disease. A Celebration of Life Service will be held at 11am on Feb 25th at St. John Fisher Church, 5448 Crest Road, Rancho Palos Verdes, CA. The family requests no flowers; however donations may be made to the Palos Verdes Resale Thrift Shop, 2321 Pacific Coast Highway, Lomita, CA 90717 in tribute to Fran's living legacy.