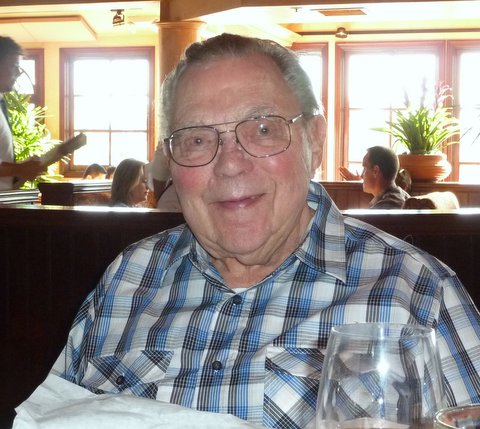 Harry W. Petersen, a 96 year resident of Redondo Beach, passed away peacefully in his Redondo Beach home on Monday October 9, 2017. Harry lived his entire life in Redondo Beach, and was a retired Police Captain having served with the Redondo Beach Police Department for 30 years, as did his father who passed away while serving as the Police Chief. In his retirement, he enjoyed traveling the country with his fifth wheel trailer and spending time with his family. One of his favorite things was to attend his grandson Kevin’s baseball games as he was growing up. He never missed a game and was once named an honorary member of the team, due to his devotion. He was an avid Dodgers fan and shared a special interest in railroads and trolleys with his younger brother Robert. Harry was also a member of the Redondo Beach Elks Lodge for the last 67 years. In his later years he had the assistance of some wonderful caregivers; Donna, Susie, Erika, Nancy, Eren, Lydia, and Yodit, who were devoted to him and helped make his life comfortable. He was a kind, gentle, and generous soul who always had wonderful stories about the “good old days” in Redondo Beach. Harry was truly loved and will be missed by all who had the pleasure of knowing him. Harry is survived by his son Richard Petersen and his wife Carol, of Torrance, as well as his grandsons Kevin Petersen and Jeffrey Petersen, his granddaughter Lynette Rice and her husband Dennis, his great granddaughters Tyler and Rylee, his sister in law Laura Argyris, his niece Mary Kay and her son Montgomery, and his daughter-in-law Eva Petersen. Harry was pre-deceased by his brother Robert Petersen, son David Petersen, and wives Mary and Frances Petersen.