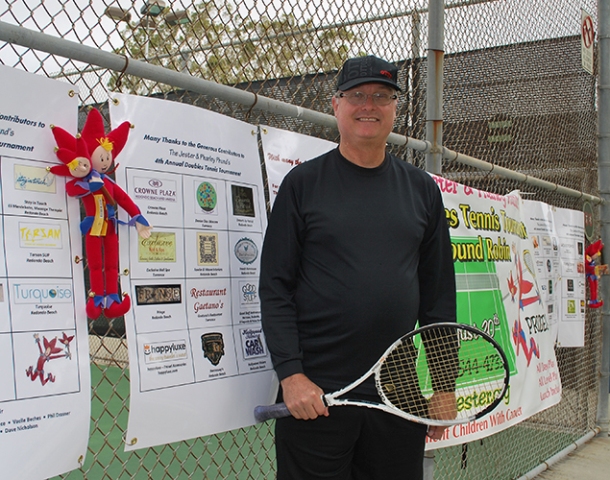 Hans Lavik, devoted husband, deeply loved family member, trusted friend, dedicated company co-founder and outstanding tennis player, passed away. Hans, a reliable competitive tennis scorer in the win column with a wicked lefty forehand passing shot down the line, will be sorely missed on and off the tennis court! Beloved husband to Molly Lavik, Hans is also survived by his parents Arne and Karen Lavik, brothers Eric Lavik and Nils Lavik, brother-in-law Christopher Wachs, sisters-in-law Lori and Randi Lavik, and nieces and nephews Lindsey, Erica, Lars, Bjorn, and Simone. Hans was incredibly good-natured and fun-loving; accomplishing much in his 55 years. Hans was born in Germany in 1962 as the firstborn son of Arne and Karen Lavik. The family moved to California when Hans was eight months old, settling in Torrance, a Southern California suburb near the coast. From an early age, Hans was passionate about listening to talk radio. His transistor radio was always nearby and Hans delighted in talk radio programs. Hans was an amazingly adept athlete, excelling at tennis, a sport he started playing at age two by hitting a ball against his kitchen refrigerator. Hans enjoyed traveling, camping, hiking and skiing with his family, especially enjoying trips to Norway to visit extended family every summer with his mother and younger brothers Eric and Nils. Education was something Hans enjoyed and he was a very good student. After graduating from West High School in Torrance, Hans thrived in academics, attending Point Loma Nazarene University in San Diego. Hans participated in several activities at Point Loma including Circle K, the Literature Club, and Student National Association Intramural Sports (where he played ping pong, tennis, volleyball and basketball). He graduated in 1986 with a Bachelor of Arts in Literature/Liberal Arts Studies/Education as well as earning a Professional Clear Multiple Subject Teaching Credential. This led to a rewarding career as an elementary educator. Hans relocated back to Redondo Beach near his home town Torrance, CA to teach at a local public school. During this time he met and fell madly in love with and married Molly Wachs in 1993 in a beautiful wedding in Rancho Mirage, CA where the couple lived for the first years of their marriage. Molly and Hans also resided in Redmond, Washington and settled in Redondo Beach, where they raised two kitties, Bandit and Baby Girl. After a decade of teaching, Hans returned to school in order to make a career change. He enrolled at Long Beach State University and earned a Bachelor's degree in Business Administration with an emphasis on Accountancy in 2001. Soon after, Hans took a finance position at Jack Nadel International in Los Angeles; his career flourished here, rising up to a valued accounting management position. At JNI Hans was a trusted, devoted and engaged finance professional in a growing and challenging business. Yet Hans also showed his fun side, including making by-hand creative Halloween costumes that thrilled people at JNI and typically won one of the company’s annual Halloween costume contest categories. In addition, Hans co-founded with Molly, Mentor InSight, Inc., a media and consulting corporation dedicated to transforming thousands of entrepreneurs’ venture visions into reality. Hans served as the Chief Financial Officer Board Member for Mentor Insight, Inc. where he also enthusiastically donated his time, assisting in its charitable work at many non-profit events. Hans continued to enjoy sports throughout his life. He played Beach Volleyball on the Strand in Hermosa Beach and resumed his tennis later in life, playing in competitive tennis leagues in his community, where he won many tournaments and trophies. Hans is described by his teammates as a reliable score in the win column with a wicked lefty forehand passing shot down the line. Though rated a 4.5 player, he would always be available to play with those with lesser skills. His large (over 6’) presence on the court and at tennis socials will be greatly missed. Hans continued to enjoy talk radio programs and hosts throughout his life. He was an expert in the history and lore of the Los Angeles talk radio market and was even a semi-frequent caller. Hans loved attending live broadcasts, industry events and station remotes. A celebration of Hans Lavik’s life is being planned on Sunday June 3rd; if you would like to attend please contact: info@mentorinsight.net