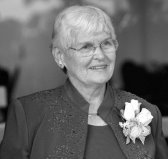 GWEN RICHARDSON Gwendolyn June (Philips) Richardson, of Palos Verdes, died Friday, August 15, 2014, surrounded by her family. She was 84. Born in Berwyn, Illinois to Virgil and Pauline Philips, Gwen spent her childhood in Illinois. She graduated from Morton College before attending Valparaiso University. She joined her brother, Dick Philips, at United Airlines, where she worked as a stewardess. In 1955 Gwen met William "Bill" Richardson in Manhattan Beach. They were married near San Francisco and settled in Palos Verdes. She was soon occupied raising five children, but she also enjoyed her work as a teacher's aide at Rancho Vista Elementary. In addition she devoted thousands of volunteer hours to the Palos Verdes Library, the Banning Museum, and the Cabrillo Museum. One of her greatest passions was genealogy, which took her on trips across the country. With a friend she started a small company called The Perfect Gift. Gwen could also be found tending her garden, collecting antique hatpins and enjoying the company of family and friends. She will be forever remembered by the countless people she touched with her warmth, humor, and kindness. Gwen is survived by her children, William Richardson of Aurora, Ohio; John Richardson of Laguna Niguel, California; Keith Richardson (Eileen Quinn) of San Diego, California; Mickie Williams (Scott) of Lake Oswego, Oregon; and Janet Richardson (Mike Robinson) of Long Beach, California; and four grandchildren, Ryan Williams of Wichita Falls, Texas; Erin Williams of Houston, Texas; Kyle Richardson of San Diego; and Andrew Richardson of San Diego. She was preceded in death by her husband of 57 years, as well as her parents and brother. Services will be held September 6 at Green Hills Memorial Park. Please use this website to share memories, leave messages for the family, or obtain directions to the service.