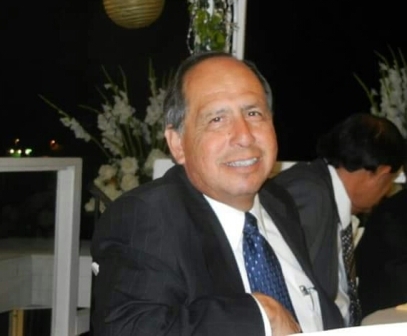 Guadalupe De La Cruz Jr., a 24 year resident of Long Beach, CA, passed away on Monday July 11, 2016 in Lawndale, CA. Born in Hebronville, TX, Guadalupe was 65 when he died. Known to his friends and family as Lupe, he was a kind man with a giant heart. He dearly loved his family and held most precious the love of his 12 grandchildren and first great grandchild. Lupe was an unwavering advocate for his community, learning early in his life that we all have a role in making this world a better place. From a humble beginning, Lupe knew the value of hard work and education. At a young age he started working alongside his family in the agricultural fields across the southern Unites States. Migrating with the crops, Lupe and his family settled in California's central valley where he graduated from Le Grande High School. He went on to attend the California State University Fresno. Lupe was the college's first student body president of Mexican American heritage. As a migrant farmworker, he leant himself to the Chicano and farmworker movements, a passion he carried with him his whole life. In his lifetime he enjoyed many careers. First he worked with farmworkers at a job training program in Fresno, California, and later for political offices in Sacramento and Los Angeles; including for California Lt. Governor Leo McCarthy and US Congressman Esteban Torres. He transitioned his career to Hispanic Marketing where over the span of two decades he would work for all three major US soft drink companies; Coke, Pepsi, and Dr. Pepper. Returning to his youthful longing for music; as a young man he was a drummer in the bands Department of Wildlife, Rainbow and Meztizo, Lupe was a marketing consultant for various entertainment companies, artists, and industry organizations, notably Capitol/EMI and Univision. For the past six years, he worked for Children's Miracle Network Hospitals as a member of the Hispanic Programs team. He worked tirelessly for the kids served by the Children's Miracle Network Hospitals and was filled with empathy and compassion for their families. Known for his creativity, Lupe inspired his coworkers and used his charm and humor to engage everyone in raising funds and awareness for local children's hospitals. Lupe is survived by wife Virginia De La Cruz; sons Guadalupe De La Cruz III and Carlos De La Cruz; his daughter Leticia Martinez; father Guadalupe De La Cruz, Sr.; brothers Juan Williams, Luis De La Cruz, and Roel De La Cruz; and 12 grandkids and one great grandchild. He was preceded in death by his beloved mother Ramona Nunez De La Cruz and sister Maria De La Cruz Romo. A gathering of family and friends will be held on Monday July 18, 2016 at Rice Mortuary, Torrance, CA from 5:00 pm until 9:00 pm. The Service will be held at Our Lady of Guadalupe Catholic Church on Tuesday July 19, 2016 at 10:00 am. A reception follows at Rice Mortuary from 12 noon until 2:00 pm. In lieu of flowers, donations may be made to the Children's Miracle Network at www.helpmakemiracles.org/campaign/lupe.