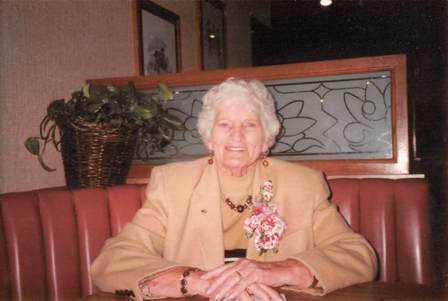 In Loving Memory of Gratta Josephine Belcher November 26th, 1924 – April 5th, 2017 Gratta was born and raised in West Virginia, a coal miner's daughter. She was one of 6 children. Four boys and 2 girls. Jack, Don, Dillas, Clifford, Ruth and herself. She was the last surviving sibling. She attended The Church of Christ and was baptized on February 17th, 1944. After her education, she worked for Union Carbide as a blueprint and Photostat technician for 11 years. She decided to take dancing lessons at Arthur Murray Dance Studios. That is where she met the man she would spend the rest of her life with, James Belcher. Whom she referred to as her Angel. They dated for 3 months and wed on January 1st, 1954. They purchased their first home on Cloverleaf Circle in Malden, West Virginia. They welcomed both of their children into this home. First Karen in October of 1955 and Dennis in October of 1957. As a family, they worshiped at the Bell Church of Christ for approximately 9 years. James grew tired of working in the coal mines in 1964, so they decided to move to sunny southern California. They sold the house and furniture, packed up the babies and headed west. They first ended up in El Centro with her brother Dillas and his wife Mary. After 3 months James found work and they moved to Torrance. They became members of different Church of Christ's in the area. The final membership was at the Torrance Church of Christ and they attended until their passing. For Gratta that was over 40 years. When Jimmy retired in 1989 they enjoyed numerous vacations together. Some of those vacations included Jamaica, Hawaii and even cruising. Gratta's first love was being a wife and mother. She also adored her only grandchild Kylee. She attended all her daughter's competition sporting events and all other activities that her children were involved in. She loved the beach, swimming, family and friends. She loved to read the bible and teach others about Christ. She knew the scriptures through and through. She had 92 years on this earth as a happy content women. She was ready to go home to be with the lord. She is survived by her loving Daughter Karen, Son Dennis along with the love of his life Cindi, Granddaughter Kylee along with her fiancé Juan. And a multitude of Nieces, Nephews, Cousins, Loved ones and a huge circle of friends.