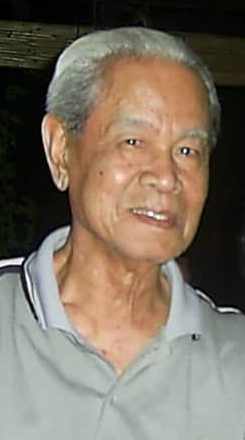 Graciano Cordero Alonzo, nicknamed Cianong , Filipino, 92 years old passed away peacefully at the hospital on July 22, 2020. He is a native of Cuyapo Nueva Ecija and Narvacan Ilocos Sur,  Philippines. He is a graduate of the vocational course Master Electrician.

He was born to parents Joaquin Alonzo and Clara Cordero on December 6, 1927 in Cuyapo, Nueva Ecija. His parents died when he was only 8 years old. As the eldest son, he was adopted by Thomas Alonzo who was his parents’ relative. He has one younger brother Terson and a sister Iday. They were all distributed and adopted by different relatives.

During his teen years after WW2, he joined the local provincial militia group to combat armed crime, confiscated firearms and maintained peace in the province. Although he became the leader of the militia group, he refused to join a larger group in the mountain as his foster dad encouraged him to go to Manila and study.

He was married to Lourdes Molina, the love of his life, on March 12, 1949. Graciano is survived by his wife Lourdes and his six children: Letty and husband Bing, Gerry and wife Imelda, Merlita and husband Efren, Angelita widowed by her husband Bong, Gary and wife Erlinda and Robert and wife Elsa. Fourteen grandkids and seventeen great grandkids as well.

He worked in a textile company (NDC) during the day and security guard in the evening. At home, he fixed household electronics on the weekend and his spare time. He worked hard in order to support his family needs and to pay for his kid’s education. One rainy night, he was mugged and almost killed by two men by hitting his head and dumped him in a ditch. He came home bleeding. He realized that he does not want to lose his life which would make his family suffer. He then applied to an international shipping company as an electrician in a big cargo ship. He was promoted to chief electrician after many years of hard work then applied in an international tanker ship.  His achievements improved the life of his family and kids, enabling him to send his six children to college and graduate.

He retired after all his kids graduated and two of them were working abroad. They bought him a passenger public transport jeep for him as a retirement hobby. In 1995, one of his children was able to have him and his wife emigrate to the United States.

He loved his wife and kids so much and likewise was loved by them. He will always be missed and will remain in their hearts forever.