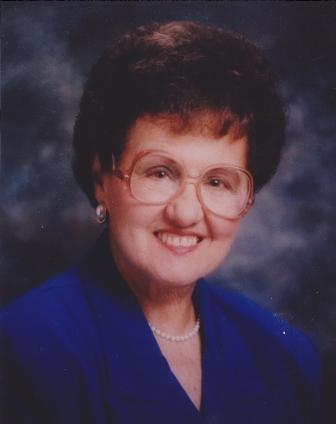 Grace M. Rinaldi August 16, 1916 – March 1, 2012 Grace Marie Rinaldi, 95, of Hawthorne, CA., passed away on Thursday, March 1, 2012. She is survived by four children; Patricia Edie of Playa Del Rey, Charles Rinaldi of Huntington Beach, Arthur "Fred" Rinaldi. of Manhattan Beach and Cathy Swart of Hawthorne, along with 8 grandchildren and 6 great-grandchildren. She is preceded in death by her beloved husband, Arthur Rinaldi, who passed in 1982. Affectionately known as "Amazing Grace" for the incredible dedication and service she displayed throughout her lifetime, Grace was characterized by her commitment to Jesus Christ and an overriding spirit of self-sacrifice that pervaded every aspect of her life, none the least of which was her devotion to her family, her friends and her God. Born in Lorain, Ohio as the second of four children to Sicilian immigrants, Fred and Frances Montalto, Grace immediately displayed the spirit of ambition and achievement that would characterize her lifetime. Educated in Lorain's public schools, Grace was the first women in her family to earn a college diploma, graduating from Kent University with a degree in Upper Elementary Education. It was during her time at Kent University that she met "the love of her life," Arthur "Archie" Rinaldi. The couple married in 1940 and began building a family. During this period, Grace began her career as a school teacher, teaching in a variety of public and parochial schools throughout Kent. In 1953, Grace's fourth child, daughter Cathy, was born with cerebral palsy – a circumstance that would shape Grace's future, and that of her entire family, for the rest of her life. In order to provide Cathy with the highest level of special education and therapy available at the time, Archie and Grace made the difficult decision to leave everything they held dear in Ohio, and move the family to California, settling in Hawthorne in 1955. Reared within a devout Roman Catholic Italian family, Grace's faith was paramount in her life. It was in Hawthorne that she began her lifetime "labor of love," serving the Catholic Church as a loyal parishioner at St. Joseph's Church in Hawthorne for more than 50 years. A cursory scan over the myriad of titles and responsibilities Grace maintained conveys a life marked by personal involvement, never content to simply stand by and observe. From liturgy coordinator, to lector, to Eucharistic Minister, her roles and responsibilities at St. Joseph's were far too extensive to enumerate. Few individuals will realize the depth and breadth of service, honor and achievements that Grace experienced over these years of service to her Church and to the evolving role of women within the Catholic community. For many, Grace will be most remembered for her four decades of service to both the Archdiocesan Council of Catholic Women (ACCW) and the Catholic Daughters of the Americas (CDA). Grace served in all capacities for both organizations, ascending to positions of President of ACCW and National Regent for CDA, the highest-ranking offices within these organizations. In 1970, Grace would be faced with yet another challenge that would characterize the rest of her life when beloved husband Archie was diagnosed with Alzheimer's disease. For the next 12 years, until his passing in 1982, Grace would not only provide care and support to her ailing husband, but also assume a larger burden for her entire family. In an effort to meet increasing financial demands, Grace earned her license to provide travel agent services, subsequently organizing and leading trips to the Holy Land. Amazing is the fact that Grace rose to the challenges presented by her husband's deteriorating health, while still maintaining her wide breadth of responsibilities and service to the Church. During this period, a variety of honors were bestowed on Grace, most notable of which were the Pro Ecclesia Et Pontiface Medal from Pope John Paul II, Cardinal's Award for esteemed service to the Church and Archdiocese of Los Angeles, St. Elizabeth Anne Seton award for work with youth and the ACCW Moderator's Award for her ongoing dedication to the Church and community. Additionally, Grace enjoyed several rare and unforgettable experiences, including a private audience with Pope John Paul II at the Vatican, meetings with Mother Theresa and President George Bush, and traveling to Beijing where she was a U.S. representative at the Non-Governmental Organizations Forum on Women. As numerous and impressive as her achievements were, Grace always displayed humility, giving credit to others. "In honoring a person, you also honor others, as no person functions alone," she said. "You get more fulfillment from serving others, through the lasting friendships you form that sustain you through life." Grace leaves a legacy of self-sacrifice, perseverance, achievement and commitment to family and faith that will inspire and guide her family for generations to come. Her love and leadership will be missed by all who were fortunate enough to have known her. In lieu of flowers donations may be sent for the benefit of Cathy and Karl Swart, payable to Fred Rinaldi, 1772 Voorhees Ave, Manhattan Beach, CA 90266.