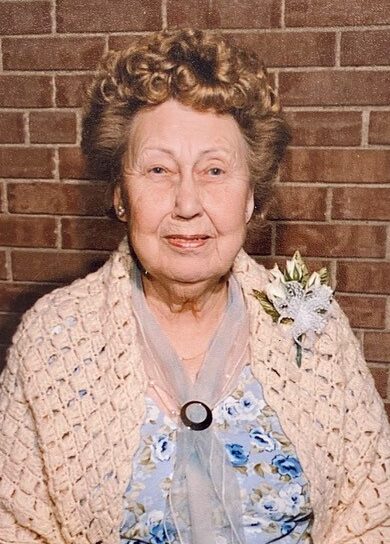 Gloria Lee (McCollum) Hennies, 95, died peacefully November 14, 2022, in her home in Redondo Beach, California. For two years, she valiantly fought a blood disorder with family and devoted caregivers nearby. Born October 2, 1927, in Gary, Indiana, she grew up on a farm in Louisville, Illinois, the daughter of Everett Lowell and Sarah (Wagoner) McCollum, before bravely venturing to Southern California by bus at age 19 to live with an aunt and do office work. She met a young Navy veteran, Gordon Hennies, while taking dancing lessons. They were married on August 30, 1949, at Good Shepherd Lutheran church in Inglewood. Baptized and confirmed in December 1950 as a Child of God at Good Shepherd, she served there as a Christian Reader, Altar Guild member, and Society President for LWML. She also served hot lunches to her children and other students at Good Shepherd Lutheran School.

Gordon and Gloria raised five children while residing in Inglewood. Faithful wife and mother, Gloria found time for both Little League games and encouraging piano lessons. She enjoyed painting, reading, sewing and knitting, Dodger games, and hosting many friends and family members with her good cooking.

With three boys in their teenage years, she finally found time to enter college to earn a business degree and teaching credential in 1981, working in adult education for many years. Retirement saw Gordon and Gloria move from their home of nearly 40 years in Inglewood to Santa Maria in 1989, where they resided for 20 years and attended Grace Lutheran Church. As a world traveler with Gordon and always an avid reader, Gloria collected many books and souvenirs.

Returning to the South Bay in 2009, she became a member of Ascension Lutheran and, at her senior condo in Redondo Beach, joined a book club and played games with friends.

Gloria was preceded in death by her parents, brother Lowell McCollum, Jr., husband Gordon, and son, Craig. She is survived by four children, Gayle (Leon Tarr) of El Segundo, Roger of El Segundo, Curtis (Dorothy Muncey) of Mariposa, and Brian in the Philippines, six grandchildren, four great-grandchildren, and brother Larry McCollum and sister Linda Jordan in Louisville, Illinois, as well as many nieces and nephews.

Viewing will occur on Friday, December 2, from 4 pm to 7 pm at the Lighthouse Memorials & Receptions – Rice Center, 5310 Torrance Blvd, Torrance.

In lieu of flowers, the family requests donations be made to Ascension Lutheran Church or a charity of your choice.