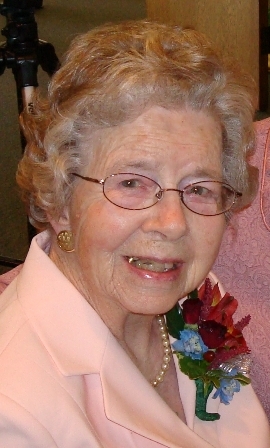 Gladys Ross Cordes 1916 - 2014 Gladys Ross Cordes, who resided in Rancho Palos Verdes, CA for the past 10 years, passed away February 21, 2014 at the age of 97. She was born July 28, 1916, in White Hall, IL. Gladys was a home economics teacher at Banning High School in Wilmington, CA for 18 years. She enjoyed cooking, gardening, reading, butterflies, and tea parties. Gladys will be dearly missed by everyone who knew her. She had a big heart and always had a kind word to say. She was preceded in death by her husband, John Edward Cordes, who died in 2003 after 63 years of marriage. She is survived by her sister Lucy (Walter) Morrison of Palisade, CO, her brother Donald (Ann) McCollister of Lake Ozark, MO, three children, six grandchildren, and four great-grandchildren. A private celebration of Gladys' life will be held prior to her inurnment at Fort Rosecrans National Cemetery in San Diego, CA.