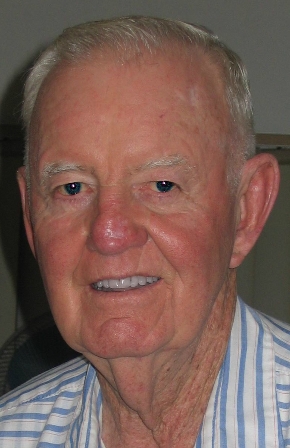 Gilbert Evans Bynon Died February 21, 2013 in Torrance, California, one month after his beloved wife Donna. Gilbert was born in May 1925 in Gebo, Wyoming to James and Ellen Bynon. He was the second of three children. Gilbert married Madonna Finnegan in Rock Springs, Wyoming in 1946. They resided in Rock Springs, Wyoming and Iowa before moving to Torrance, California in 1957. Gilbert served in the Navy in the South Pacific during WWII. He was stationed in the Marshall Islands on the tiny atoll of Ulithi. There he formed lasting friendships that endured throughout his lifetime. Survivors include his daughter Patricia Mcilraith (Bill McKaig), son Larry (Sheri) of Torrance and daughter-in-law Betty Bynon of Ionia, Iowa. Gilbert was blessed with seven grandchildren, seven great-grandchildren and one great-great grandson. Gilbert is also survived by a sister, Dorothy Williams of Oregon and many nieces and nephews. He is preceded in death by his wife Donna; son David; and brother, Jim. A Memorial service will be held 10 am Saturday, March 9 at Rice Mortuary 5310 Torrance, Blvd., Torrance 90503. Reception to follow. Burial will be in St. Boniface Catholic Church cemetery, Ionia, Iowa at a later date.