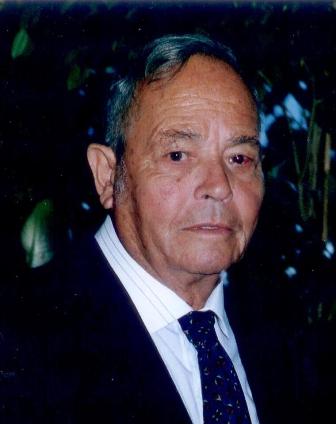 Gerassimos Evangelatos, "Jerry", passed away on August 30, 2012 in Manhattan Beach, CA. He was born in the province of Cephalonia, Greece in the village of Agona on November 20, 1916. His mother and father were Vasiliki and Gregory Evangelatos who are deceased and passed away in 1956 and 1959 respectively. At the time of his birth, Gerassimos had 5 brothers and sisters. They were Angelo, Antzouleta, Leonidas, Spiros, and Maria. During the 1918 Spanish influenza Gerassimos' siblings were decimated so that by 1919 he had only his older brother and sister. In 1919 the family moved to Argostoli and it is here that Gerassimos attended public schools and essentially grew up. He was a natural swimmer spending many hours enjoying the warm waters of the Mediterranean. Gerassimos essentially grew up here in the 1920s and early 1930s. Upon graduation from high school Gerassimos relocated to Athens where he attended the Engineering Academy of the Greek Merchant Marine from 1934-1940. He was drafted into the Greek Navy in 1940 and was serving on the Pleas when Germany attacked Greece in 1941. The ship was sunk by German Aircraft in 1941. Gerassimos was among the ship's survivors and made his way back to Argostoli where he spent the duration of the Second World War with his mother and father, sometimes working two and three jobs just to sustain his elderly parents. When the allies liberated Greece, Gerassimos secured his Merchant Marine union card sailing from Greece in 1945 where he sailed to Turkey, Italy, Libya, The Netherlands and Germany. During the Atlantic crossing he was injured and put ashore to recover in Newport News, Virginia. Upon hearing of his nephew being in America, his uncle Dionysios Evangelatos came east and convinced Gerassimos to come to California. Gerassimos came to California and met his future bride Sophia Vengel (Vagelatos) at the Greek Community Easter Picnic in April 1948. They were married on June 6, 1948, the 4th anniversary of D-Day. Gerassimos secured his American citizenship in 1954. Gerassimos and Sophia had three children, Gregory, Vasiliki and Jenny. They raised all three children at 927 10th Street Manhattan Beach. Gerassimos worked as a commercial flower grower essentially following in the footsteps of other Greeks who came to the South Bay of Southern California. As the land was gradually absorbed by development, Gerassimos returned to the maintenance of machinery at Douglas Aircraft in Torrance and El Segundo, landscaping and other defense contract work at Consolidated Missile in Lynwood California. With the downturn of the defense industry following the ending of the Vietnam War Gerassimos went to work for Elco Pacific, a computer components manufacturer and Webb Corp., a major washing machine and professional laundry service. He retired in 1982. Gerassimos enjoyed an over 30 year retirement. He is survived by his son Greg Evangelatos and daughter-in-law Jeanine Vandevort; daughter Vasiliki Antonelos and her husband Bobby; son-in-law George Hatzidakis; and grandchildren: Gregory Michael Evangelatos, Lia Hatzidakis, Gerassimos Hatzidakis, John Hatzidakis, Sophia Hatzidakis, Rebecca Hatzidakis, and George Hatzidakis. Gerassimos's wife of 47 years of marriage, Sophia, preceded him in death in 1995 along with his beloved daughter Jenny Hatzidakis who passed away in 2003. A gathering of family and friends will be held at White and Day Mortuary in Manhattan Beach on Wednesday September 5, 2012 from 5 to 9pm with a Trisagion at 7pm. The Service will be held at St. Katherine Greek Orthodox Church in Redondo Beach on Thursday September 6 at 10am. Burial will follow at Pacific Crest Cemetery in Redondo Beach.