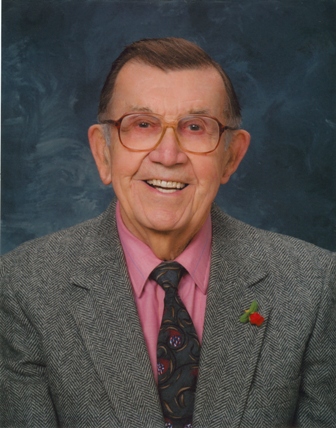 Gerald "Jerry" Elias Conger With a heavy heart, we announce the passing of our beloved father and grandfather Gerald "Jerry" Elias Conger on Thursday, June 7, 2012. Jerry was born on March 26, 1925, to Roy and Margaret Conger in Neligh, Nebraska, the oldest of four children. He grew up on a farm and after graduating from Neligh High School in 1942, he attended the University of Nebraska until he was drafted into the U.S. Army. He served in the Pacific during World War II. He resumed his studies after the war before moving to Los Angeles in 1947. Shortly after moving out West, he met Grace McNamara, the love of his life. They were married for more than 60 years and had a son, Steven, and a daughter, Maureen. Jerry and Grace owned a successful insurance business for 40 years and, upon retirement traveled the world and enjoyed volunteering for 23 years at "The Little Sisters of the Poor" home for the elderly. He was also an active member of the Knights of Columbus and "The Catholic Golden Age Club." Recently named the Outstanding Alumnus at his 70th high school reunion, Jerry was proud of his hometown and cherished this award. He always had a joke or story to share and will be remembered for his faith in God, devotion to his wife, love of family and friends, and overall zest for life. Jerry was preceded in death by his parents, his loving wife, Grace, and his son, Steven. He is survived by his devoted daughter and son-in-law, Maureen and Paul Barton, his daughter-in-law, Renee Conger, grandchildren Terrin (Jay) Griffiths, Ryan (Sacha) Mendivil, Eric (Natalie) Conger, Nicholas Conger, and great-grandchildren Kaitlyn, Emily, and John Conger and Luke Griffiths. He is also survived by his siblings, Madelyn Rice, Jack Conger, and Patrick (Julie) Conger, sister-in-law Jolene Conger, and many loving relatives who will always cherish his memory. Visitation will be at Rice Mortuary, 5310 Torrance Blvd., Torrance, on Wednesday, June 13 from 5 to 9 PM with a rosary at 7 PM. Funeral Mass will be at St. John Fisher Catholic Church, 5448 Crest Rd., Rancho Palos Verdes, at 1 PM on Friday, June 15. In lieu of flowers, please consider a donation to "The Little Sisters of The Poor" home, 2100 So. Western Ave., San Pedro, CA, 90732.