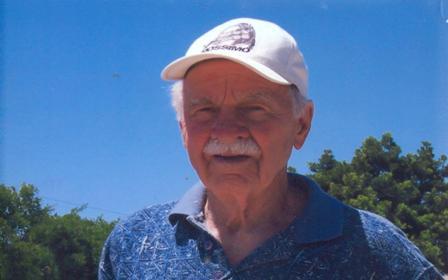 Gerald Reynolds (Jerry) Born January 14, 1920 in Lenox, Iowa. Passed away October 28, 2014 at the age of 94. Enlisted in the Marines in 1941. Went to naval base on North Island in San Diego to get rating and go to flight school training. There he became a member of "Mag 25" (Marine Air Group). From there he went to Guadalcanal and was a Crew Chief, "Flying Mechanic". He became a Sergeant and also a "Line Chief" and got to fly an "R5C" or "C46". He went to places like New Caledonia, Solomon Islands, Australia, New Zealand and Hawaii. In 1946, an engineering officer gave him a letter of recommendation to work for American Airlines as a mechanic. So he left the Marines but only worked at the airlines for six months. He always wanted to go to China so he re-enlisted back into the Marines. Then he went to China for one year. Came home to San Diego after being discharged and went back to Iowa. He then got together with Millie. They only dated for two months. Got married in Kansas City on July 19, 1947. They moved to Long Beach and he was hired back at American Airlines. Daughter Kris was born in 1949. They moved to Torrance in 1951. Daughter Jerrilyn was born in 1956. Jerry retired from the airlines in 1983 with 35 years. Jerry was also known as "Papa" to his grandchildren and great-grandchildren that he had a great passion for. His family was very important to him and he always looked forward to family get-togethers. He is survived by his wife, Millie of 67 years; daughter Kris (Ron); daughter Jerrilyn; his beloved grandchildren and great-grandchildren; sisters and a brother. He was known for his kindness, generosity, helpfulness and being such a gentle soul. He will be missed by so many. Memorial Service will be held November 21, 2014, 2 p.m. at Rice Mortuary in Torrance.