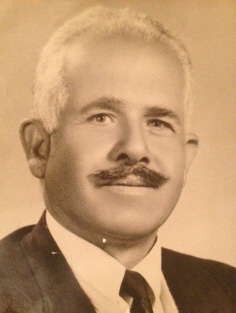 George Roubine Nino February 16, 1915 – April 21, 2012 George Roubine Nino was born in Alramleh, Palestine on February 16, 1915. He was the oldest son of Roubine and Zahiya Nino and had two brothers and six sisters. At the age of 26, he married his wife Hilda. In Tel Aviv, he owned and operated a franchise of fuel tankers for Socony-Mobile oil, and his tankers transported fuel through Jordan, Syria, Lebanon and Iraq. In Amman, Jordan, he later established the United Busing Company, Al Salam Bus Company, Al Nisr Bus Company, and Al Wafa Transport. His transportation company grew to be the main busing establishment and was later nationalized by the government of Jordan. He was then appointed as the President and CEO of the Company, supervising more than 400 employees. He also owned a textile factory named Jordan Pullovers and Stockings Manufacturing Company. Later, George began visiting the United States in 1973, and then purchased a home in Redondo Beach, California in 1979, where he spent the remainder of his life. George was very successful and was exceedingly generous with his earnings. He donated money to churches regularly. He was one of the founding members of College de La Salle School and Church, purchasing the land on which the school was founded, where all his children later attended. He regularly donated clothing to the orphanage in Sadanaya, Syria, as well as to various charities. He was known to help anyone who reached for his financial assistance. George Nino was no ordinary man. He was extraordinary in every way. He was an inspirational, quiet, and reconciliatory leader. He was a mellow, humble, and kind man. He had a strong work ethic. He was tolerant of all and respectful of everyone. He was a religious man of great faith, and his faith was not blind, but rather was based on his true life experiences. He was the foundation and anchor of his family. George enjoyed his home in Redondo Beach, and especially the large scenic window with the street view, where in his later years, he sat every day for hours watching, thinking, and observing. He had a green thumb and had a passion for gardening. He cultivated avocados, loquats, kumquats, guavas, figs, lemons, oranges, apricots, jujubes, tomatoes, and many herbs. He loved roses of all different colors and would cut the blooming roses to place in his prayer corner. He also would make sure to cut a rose each day for his grandchildren to take to their school teachers. He planted and gave many trees away, and nearly everyone in his family can say they have a tree from him. Like his love for nature, George also loved animals. His favorite dog was the German Shepherd. George had a perfect memory and was a great story teller. He was able to captivate an audience with his stories or humorous jokes. Even as his final days approached, he was able to recount any story he was asked about in perfect detail. George was a true family man. He had 8 children, 26 grandchildren, and 4 great grand children. He loved to be surrounded by his family and was always conscious about every member of the family. He extended his utmost support to his children and grandchildren in all their endeavors, from business to family to education. He was welcoming to his son-in-law, daughters-in-law, grandsons-in-law, and granddaughters-in-law and their families, and he never made anyone feel like an outsider. He was also warm and hospitable to all who visited him. He was always insistent on making great meals, celebrating his friends' and relatives' company, which he thoroughly enjoyed. George was a loyal and loving husband to his wife Hilda for 68 years, who survives him. He is also survived by his children Robert and Rima Nino, Norma Nino, Nabil and Rouwaida Nino, Sami and Lana Nino, Kameel and Seham Nino, Ramzi and Patricia Nino, Niveen and Tony Bourche, Marina Nino, his grandchildren George Robert Nino, Ramie Nino, Zena and Firras Zawaideh, Samar Nino, Raed Nino, Nabila and Majed Arbeed, George Nabil and Muna Nino, Elias Nino, Hilda Nabil Nino, Norma Nabil Nino, Michael Nabil Nino, John Nino, Janet and Gian Yakoub, Rana Nino, Jeries Nino, Tanya and Joseph Richards, Jason Nino, Christopher Nino, Nicholas Nino, Gabriel Bourche, Steven Bourche, George Bourche, Eliana Nino, Michael David Nino, Charlie Nino, and his great grandchildren Shylah Nino, Jason Arbeed, Jennifer Arbeed, and Mark Yakoub. He will be missed greatly, and his memory and spirit will live in all his descendants.