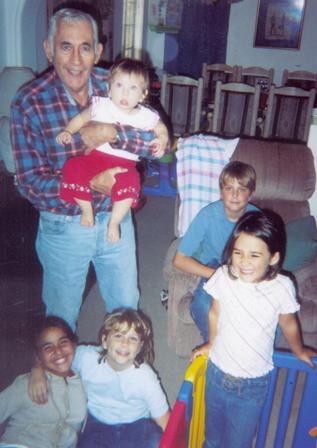 George L. Morris, a beloved husband and father passed away April 7, 2013 at the age of 85 and is at peace with Our Lord. A lifetime resident of Manhattan Beach, he leaves behind his wife of 45 years, Louise, and his children, George Morris and daughter Marion DeSanto. There are 8 grandchildren who will miss their "Papa", Michael DeSanto, Gianna, Isabella, Megan, Trevor, Madison, Ashley and Ryan, including three great grandchildren, Gala, Carter and Piper. George has a twin sister, Dolores McNeil and a younger brother, Al Morris. As we mourn hi passing we find comfort in knowing that he lives in the memories of the people he has touched. He will always be remembered as a man of genuine kindness and love with his unmatched sense of humor. He would keep the laughter going in the room with his many stories and jokes. All though his life he had a passion for baseball. Playing in the minor leagues before being drafted into the Army. He continued with the love of the game by coaching his son and later his grandson, Michael in MB Little League. Please join us to celebrate the life of our wonderful father, husband and Papa. Services Monday, April 15, 2013 at 2:00 at Rice Mortuary, 5310 Torrance Blvd., Torrance 90503. Reception immediately following. When you are sorrowful look again in your heart, and you shall see that in truth you are weeping for that which has been your delight. Kahlil Girbran Say not in grief "He is no more", but live in thankfulness that he was. Hebrew proverb Oh heart, if one should say to you that the soul perishes like the body, answer that the flower withers, but the seed remains. Kahlil Gibran For some moments in life there are no words. David Seltzer, Willy Wonka and the Chocolate Factory