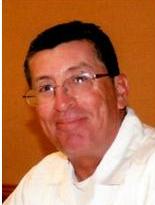 George went to be with the Lord on March 16, 2013 after a hard fought battle with lung cancer and with his loved ones by his side. He was born to George Sr. and Lilia Palacio in 1957 in Los Angeles, CA. George was a lifetime resident of Carson graduating from Carson High School in 1975. Predeceased by his father, George Sr., he is survived by his mother Lilia Palacio; brother Mario (Guadalupe) Palacio; sisters, Monica (Clark) Wolfe and Regina (Rick) Ramirez; and 11 nieces and nephews as well as a large extended family and numerous friends. He was also a proud and dedicated City of Carson employee and member of AFSCME Local 809. Visitation will be Wednesday, March 20, 2013 from 5:30 p.m. until 9:00 p.m. at Rice Mortuary, Torrance, CA. Mass to be held on March 21, 2013 at 10:00 a.m. at Our Lady of Guadalupe Catholic Church, Hermosa Beach, CA with burial following at Green Hills Memorial Park, Rancho Palos Verdes. Donations to the City of Carson Fabela Chavez Boxing Center may be made in George's memory.