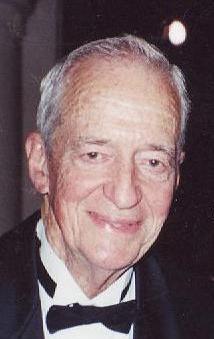 George Bartlett Ambrose, 89, sports and entertainment writer and publicist, died Sunday, July 28, at Torrance Memorial Hospital. He was a resident of Palos Verdes Estates for the past 35 years. A native of Exeter, California, Ambrose served four years in the U.S. Army upon graduation from high school. After another four years, he graduated from his beloved University of Southern California with a journalism degree and a lifelong love of track and field. He proudly wore his ring commemorating being track manager for the national championship team. In 2005, Ambrose was awarded USC's Heritage Award for lifelong contributions to the Trojan track and field program. Ambrose worked as sports editor of the Van Nuys News, now the Los Angeles Daily News, from 1950 to 1952, and as associate sports editor of the Glendale News-Press, covering three Olympic Games. He also covered the "Mile of the Century" race between Roger Bannister and John Landy in Vancouver in 1954. In 1960, Ambrose began the first of two stints as a unit publicist with CBS Television Network in Hollywood. He handled shows like The Twilight Zone, The Carol Burnett Show, Route 66 and Hennesey. Additionally, he did pre-publicity for the 1960 Summer Olympic Games in Rome. He became sports information director at USC, working that job from 1963 through 1967. He mapped the publicity campaign of Heisman Trophy winner Mike Garrett in 1965 and directed publicity for the entire Trojan athletic program. Back at CBS again, from 1968 to 1979, Ambrose handled M*A*S*H, Cannon, Here's Lucy, Barnaby Jones and Medical Center. He did pre-publicity on the 1984 Olympic Games and prepared the brochure on the introduction of the Olympic mascot, Sam the Eagle. In retirement, Ambrose aided in the selection of annual Heritage Award winners for Trojan track and field for 20 years. He is survived by his wife of 40 years, Rachel; son, Josiah of San Mateo, California.; daughter-in-law, MaryAlice; grandson, Ezra, and granddaughter Polly. Services are set for 11:30am Thursday at Rice Mortuary, 5310 Torrance Blvd., Torrance, followed by burial Friday at Porterville (CA) Cemetery.