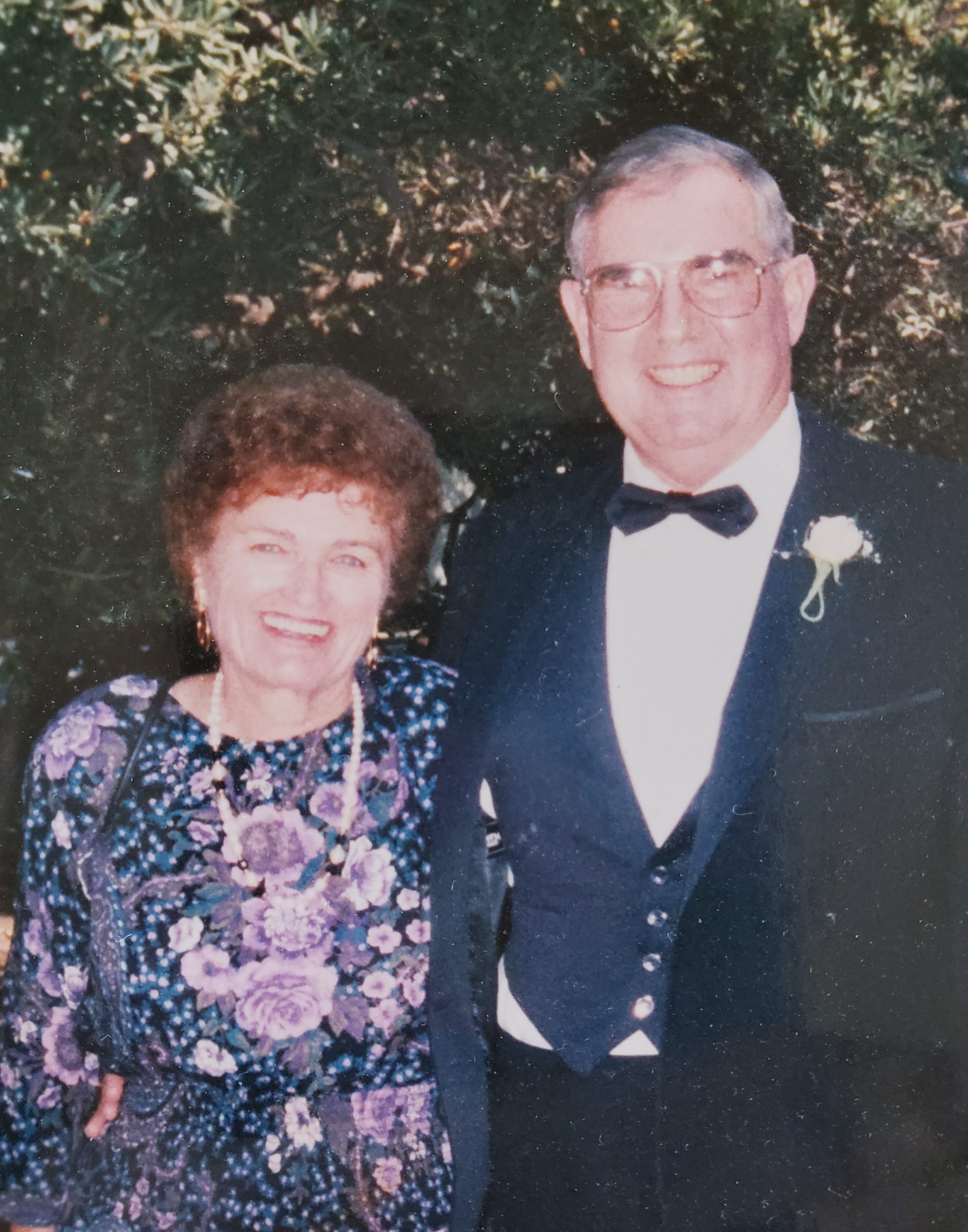 Burke, Genevieve E., a 26-year resident of, Rancho Palos Verdes, CA. passed away on Sunday, December 13, 2009 at Kindred Hospital Westminster (extended long-term acute care facility) after a courageous battle with a long illness, pulmonary fibrosis. She is deeply loved by her family, her friends, and countless children whose lives were touched by her 20 years working at Vista Grande Elementary School. These were her hobbies, her passions…the pure and centered life, unaffected by the chaos and materialism of our society.

Jenny (Jean as she was called growing up) was born on March 4, 1928 in Los Angeles, CA to her parents Charles and Theresa Cavanaugh. She was a kind and loving daughter all of her life. She was very active in the Catholic Church as a child and young adult. She graduated from Lincoln High School Class of 1946. There she was very involved in the theatrical department and upon graduation attended Los Angeles City College but she gave up her secret passion of becoming an actress to attend to everyone else’s needs before she could complete her college education.

She worked at Millirons Department Store as a Personnel Trainer until she married her husband, Raymond F. Burke, in 1952. They met while she was on a vacation with her girlfriend on Catalina Island, while his Navy ship was docked there for the evening. This encounter was the beginning of a 42-year fairy-tale romance that only some of us ever knew; they loved each other deeply and everlastingly. In 1977, they celebrated their 25th Anniversary with renewal of their marriage vows and a cruise to the Caribbean islands. During her 42 years of marriage with Ray, Jenny loved to cook and they both enjoyed having holiday gatherings. She inherited her Mother’s (Theresa’s) exceptional talent of Italian cooking, and her Father’s (Charles’) passion for focusing on the positive. Jenny and Ray both had hoped for a long and relaxing retirement, but his early passing left her feeling so empty. Although she never could subside her heartbreaking ache, she tried to remain positive and involved in her family’s life for the next 15 years.

It was only after her children were grown, the youngest in high school, that Jenny began her journey on a road that touched many children’s lives…and enriched hers immensely. She began as a playground aid at Vista Grande Elementary School in Rancho Palos Verdes. Soon, after realizing she had found her life’s passion, she began as a teacher’s aid for third grade. Those 20 years gave her so much happiness and contentment. We know without a doubt she will never be forgotten.

She taught us the meaning of devotion, of sacrifice and of true love…in her active life and in her long battle with her illness. She was known as the patient who always had a smile and a kind word for each health professional who helped her over the last eight (plus) months. There are not too many of us who will ever claim that victory. Jenny is preceded in death by her husband, Raymond F. Burke, her son, Raymond F. Burke, Jr. preceded her passing in 1999, after a courageous battle with a long illness as well, her father, Charles E. Cavanaugh, and her mother, Theresa L. Cavanaugh. We know that she now is in their loving arms. She is survived by her second child, Dr. John C. Burke, and her youngest child, Cynthia J. Burke.

Jenny is also survived by her very loving and devoted brothers and sisters-in-law, John and Theresa Cavanaugh and Charlie and Mary Cavanaugh. She has two grandchildren, Joshua Burke and Justin Burke (from her son, John) and a daughter-in-law, Janie. She was especially touched by her special “adopted” children Sheryl Burger, Laura Massoth, and Kori Carrasco who remained lovingly devoted to her during her commitment to life over the last eight (plus) months. Sheryl’s unconditional affection and never-ending devotion is particularly an inspiration to all of us…and was so very deeply appreciated by Jenny. “Aunt Jean” will be lovingly remembered by her nieces Diane Esser, Julie Pellant, Theresa Matarazzo, Patricia Cavanaugh and Sonia Harvey, who continue to carry on the traditions of her family.

Jenny’s life is one that we all hope to have, because she lived for the heartfelt, soulful connection. When the heart aches, as hers did, there isn’t anything that can fill it or mend it…except to be reconnected, which we all celebrate for her today. She may have never become an actress, but she will always be our cheerful entertainer.