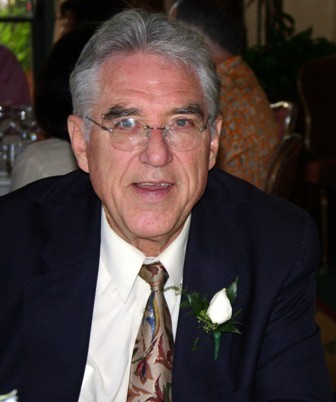 Gay J. Kay passed away at his home in Los Angeles, California on October 18, 2013 at the age of 83, with his wife and family members in attendance. Gay was predeceased by his father, Kenneth Larsen Kay, and his mother, Lucille DuVall Kay. Gay is survived by his wife of 61 years, Angela. They were married in Los Angeles on August 23, 1952. Gay and Angela are the parents of twelve children - Timothy (Marianne), Vincent (Caliz), Regina (Robert), Bernadette, Damien (Melinda), Philip (Laurie), Thomas (Bobbi), Kenneth (Evelyn), Anthony, Teresa (Francesco), Stephanie and Brian (Danielle), all of whom survive. Gay and Angela have thirty grandchildren and two great-grandchildren. Gay is also survived by his brother, Terry (and Mary Jane) Kay, and their five children. Gay was born in Long Beach, California in 1929. He graduated from St. Anthony High School in Long Beach in 1947 and went on to earn his Bachelors in Science from Loyola University in Los Angeles in 1951. He worked for over thirty-five years as a microbiologist in Glendale. Gay served as an adult Scout leader and was both a Cubmaster (Pack 118) and Scoutmaster (Troop 118), leading a number of his eight sons on outdoor adventures. Gay survived a bout with Stage III melanoma in his 40's, something that dramatically affected his life. Gay was a devout Catholic throughout his life. He and Angela were parishioners at St. John the Evangelist Church for over 55 years, were members of Marriage Encounter and later the Neocatechumenal Way in the Roman Catholic Church. Vespers and the Rosary will be celebrated at St. John the Evangelist Church, 6028 S. Victoria Ave, Los Angeles, CA 90043, on October 24 at 7:30 p.m. The funeral Mass will be celebrated on Friday, October 25, at 10 a.m. at St. John's. Interment will follow at Holy Cross Cemetery, Culver City, CA.