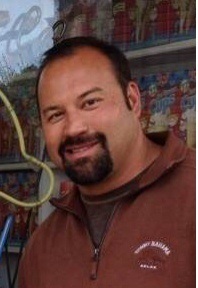 Gabriel A. Coyoca Gabe Coyoca or "Boots" as he was known to family and close friends died at the age of 45 on Monday, December 23, 2013, after a nine month long battle with Leukemia. Gabe was born in Grand Rapids, Michigan on May 24, 1968, but grew up in Redondo Beach, California when his family moved here in 1969. He graduated from Redondo Union High School and San Diego State University. Gabe was a valued and dedicated member of the southern California law enforcement community. He became a police officer in 1996, working first for the Costa Mesa Police Department, and subsequently joining the Beverly Hills Police Department in 2005, ultimately becoming a detective. Gabe was a football enthusiast, after playing the sport for many years. He loved watching the San Diego State Aztecs, and his parents' alma mater, the University of Michigan Wolverines, and his nephew's CIF championship high school football team, the Palos Verdes Sea Kings. Gabe also loved the sun, the ocean and the beaches of southern California. But most of all, Gabe loved spending time with his wife Peachjunette and their two young children, Kainoa, 9, and Katie, 5. Gabe's family has been overwhelmed by the loving support of the law enforcement communities from Beverly Hills and Costa Mesa, and the "Redondo boys" who have been his friends and brothers for over thirty years. All came together over these past nine months to love and support their brother and his family during his hard fought and courageous battle with this insidious disease. Gabe is survived by his wife of fourteen years, Peachjunette, his son Kai, and daughter, Katie. He is also survived by his three sisters and their families, who are devastated by his premature passing, Gia Alarie, and her husband Michael, Lucia Bucklin, her husband Mark and their two children Olivia and Andrew, and Clarissa Coyoca and her daughter Camille. Gabe was preceded in death by his mother Dorothy , in 2006, and his father Gabriel Coyoca, in 2007. Gabe was loved by all for his easy going and laid back personality. Throughout his nine month battle, he remained resolutely optimistic and positive, never wanting to worry or trouble anyone with his struggles. His personal philosophy as he admonished his family during the past nine months was "Don't worry about a thing, because every little thing will be alright." There will be a viewing on Thursday, January 2, 2014 from 4 to 8 p.m. at Rice Mortuary located at 5310 Torrance Blvd. in Torrance. Services will be on Friday, January 3, 2014 at 11 a.m., at St. John Fisher Church, located at 5448 Crest Rd. in Rancho Palos Verdes. In lieu of flowers, the family asks that donations be made to The Gabriel Coyoca Family Fund, a college fund for Gabe's two young children, which has been set up by the Beverly Hills Police Department. Donations may be sent to the Beverly Hills Employee Credit Union, 9298 W. Third Street, Beverly Hills, CA 90210.